“If you’re coming to the Arctic, bring a good book.” Andy Mahoney, sea ice geophysicist and assistant research professor in geophysics, University of Alaska Fairbanks, was waiting out bad weather so he and his team could travel by helicopter over sea ice. Barrow, Alaska, the northernmost city in the United States, is surrounded by the Arctic Ocean on three sides. It makes a great staging ground for sea ice science.

As a field scientist Mahoney knows his work is at the mercy of the weather. “We’re going to be going 70-80 miles out on the sea ice and there is nothing else out there.” It’s not every job that takes you flying over an icy landscape where visibility can change so drastically. Mahoney explained “We are at the whim of the conditions. If the ice starts opening up that exposes open water which puts clouds into the atmosphere. And that is part of what we are struggling against; some low cloud that’s hampering the visibility on the ground.” Sea ice conditions influence and interact with weather conditions above. Low clouds and blowing snow can create whiteout conditions, forcing pilots to navigate a world of white with no horizon visible. “It’s great to have a pilot whose judgement we can trust and makes the tough safety calls when needed. We’re enthusiastic to get out there but at the end of the day, the pilot has to get us back too,” Mahoney said.

“Our equipment is staged in the hanger. So as soon as he sets down and we refuel we’re planning to be able to take off again straight away and get out on the sea ice.” Once there, Mahoney will deploy more than one means of measuring sea ice thickness and position. We’ll take a closer look in coming weeks.

Ronald Kwok, senior research scientist at NASA’s Jet Propulsion Laboratory in Pasadena, CA, reported “Even in years when the overall extent of sea ice remains stable or grows slightly, the thickness and volume of the ice cover is continuing to decline, making the ice more vulnerable to continued shrinkage.” Often the amount of ice that grows during the Arctic’s long dark winter is insufficient to offset ice melt during the summer season. That results in more open ocean. While light-colored ice reflects heat away from Earth, dark ocean waters absorb heat and warm the ocean, further encouraging sea ice loss.

For scientists who study sea ice, their fieldwork is at the mercy of the weather. Inconstant sea ice winds currents impact weather; weather impacts sea ice. 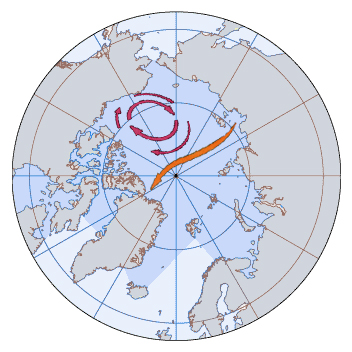 Arctic sea ice motion is driven by winds and by ocean currents. Two dominant general patterns of motion reign: a clockwise circulation in the Beaufort Sea called the Beaufort Gyre and the Transpolar Drift Stream, a current running from the Siberian coast toward the North Atlantic Ocean off Greenland’s coast.

The Beaufort Gyre keeps ice floes swirling in open waters north of Alaska. Its circular pattern causes collisions, leading to longer lived thicker ice and collision-formed ridges. The Transpolar Drift Stream sends ice toward northern Greenland. Some escapes into the Atlantic Ocean where it’s likely to eventually melt, some ice becomes trapped against northern Greenland or against the islands of the Canadian archipelago and lingers. I’ve heard it said that those places will harbor the last of the summer-season sea ice when all the rest has melted away, and for that reason it’s expected to be a polar bear habitat refuge.