For many years scientists wanted to know where Spectacled eiders spent their winters.

For many years scientists wanted to know where Spectacled eiders spent their winters. They speculated but could never find them. Finally Margaret Peterson did; a satellite tag signal got her out to the Bering Sea. There they found not just one but……

Spectacled Eiders’ story is a unique tale. Scientist, Margaret Peterson was determined to find out where the Spectacled eiders migrated to during the winter months. Peterson used satellite technology early on to try to track the Eiders. Unfortunately the battery life on the transmitters wasn’t that long in the 1990’s, about 4-6 months. But finally, one transmitter beeped out a signal that they were able to follow. And to their surprise…, well, watch the video. 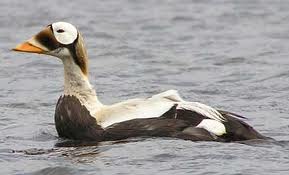 Arctic’s Amazing Birds So many birds call Alaska and the Arctic home. Spectacled Eiders, Snowy Owls, Bar-Tailed Godwits are just a few of the birds that range Alaska and make their livelihoods there, at least for the summer. Tons of insects and open habitat are the perfect place for their new hatchlings. Though it’s only a flight away, for some... Read More >