These archaeologists are uncovering a Paleo-Eskimo camp in the Gates of the Arctic National Park & Preserve. Carbon dating dates bones Andrew Tremayne discovers as 4,000 years old. The people who occupied the dig site relied on caribou and other prey. These Natives hunted game and brought kills back to camp. They used the parts and disposed of unused bones in the midden, or trash heap. Exploring the contents of the site helps archaeologists like Tremayne understand the lives of ancient humans in what is now Alaska.

Dr. Jeff Rasic is a National Park Service Archaeologist. He has excavated Ice Age Cave deposits on the Yukon River, led the underwater archaeology of Agiak Lake, and the archaeology of a prehistoric caribou drive. Dr. Rasic specializes in the archaeology of northern hunter-gatherers and is particularly interested in the earliest inhabitants of the north and how they made a living at the end of the last ice age. Since 1995, Dr. Rasic has focused on field work and research projects in Alaska, especially the northern and interior portions of the state. 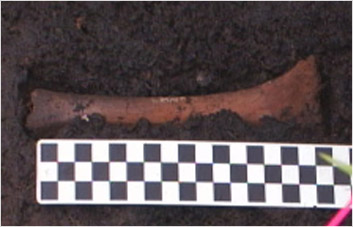