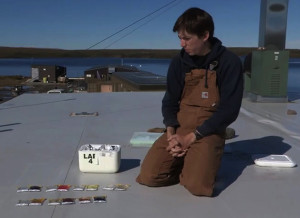 A needle on lab equipment wavers as the machine tracks precise changes in carbon dioxide concentrations in a sample. Water flows through tubes. In every droplet of water there might be a million microbes swimming, feeding. It’s a zoo in there. University of Michigan researchers Dr. Collin Ward, postdoctoral fellow in the Department of Earth […]

Liz O’Connell for Frontier Scientists – James Cameron seamlessly merged the movie-making world with the science world in his talk at the American Geophysical Union (AGU) December annual conference in San Francisco.  While movie goers suspend disbelief as they immerse themselves into this director’s blockbuster worlds in The Abyss, Alien, Avatar, and Titanic, skeptical scientists […]