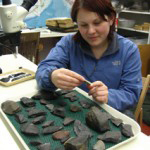 Natalia was born and raised in Magadan, Russia, where she got her first archaeological experience at the age of 12. She received her bachelors degree in Anthropology (minoring in Geology) at the University of Alaska Anchorage. During her undergraduate years Natalia spent her summers working on the North Slope of Alaska, in the central Brooks Range and along the Yukon and Charley Rivers in Interior Alaska. Natalia also participated in the last field season of the Kuril Biocomplexity Project and was thrilled to use her knowledge of Russian and English to facilitate communication between researchers from different countries. Since 2008 she has been a graduate student in the Anthropology Program at the University of Washington, where she received her MA in 2010.