Joe excavated the Matcharak Peninsula Site, an ancient hunting camp in the Gates of the Arctic National Park & Preserve. “Up until the point that the Matcharak Peninsula Site was found, you could essentially fit all the identifiable materials from these Northern Archaic sites into a shoebox,” he said; Northern Archaic artifacts were so rare. “That makes this a very unique site that has such good preservation.” 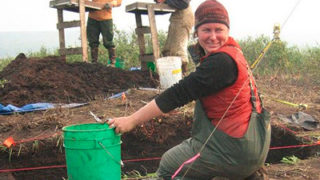