Home » All Blogs » Bears of Alaska

Interior Alaska is a hungry place — lots of boreal forest and swampy wetlands with big, flat rivers winding through. Wildlife sightings, especially of big mammals, are rare. But a recent video posted by a seismologist makes the Tanana River flats look like the Serengeti. A motion-triggered game camera installed above buried instruments shows visits […] 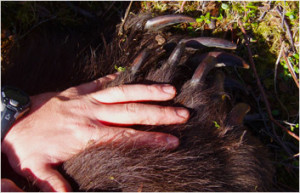 If you’re in beautiful Anchorage, Alaska visit Frontier Scientists at the International Conference on Bear Research and Management. The International Association for Bear Research and Management promotes conservation of bear species based on science-based best practice. “Bears of the World” 2016 isn’t just for scientists; attend engaging public lectures and outreach events. Look for Frontier […] 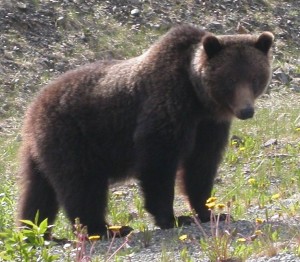 Bears have the right idea. Don’t fight the cold; just shut ‘er down for six months and emerge when it’s warmer. Why didn’t we think of that? For one thing, our bones would wither. We’d all get osteoporosis, a disease in which bones become more fragile. Bears don’t get osteoporosis, even though they hibernate for […] 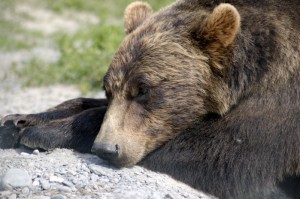 Laura Nielsen for Frontier Scientists – A grizzly bear chowing down on salmon, berries, ground squirrels, carrion, grasses and roots isn’t just hungry- he’s on a mission. During winter months while humans in cold climes are shoveling snow, most brown bears like the grizzly are sleeping. This isn’t ‘true’ hibernation; the bear’s temperature drops to […] 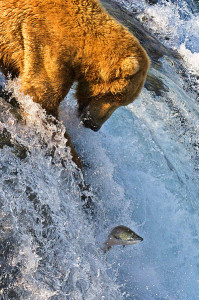 Laura Nielsen for Frontier Scientists – Can you recognize a grizzly bear? Larger than his black bear cousins, he has thick fur which can range from dark to blonde. A hump over his shoulders aids in sprinting and digging. Unlike his cousin the black bear, the grizzly has a high forehead which dips down before […] 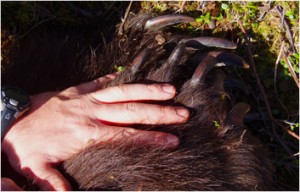 Laura Nielsen for Frontier Scientists – Encountering a bear in a place still untrampled enough to be called ‘wild’ is an experience completely different than seeing a bear in a human-dominated locale. At least, I always thought so. I’ve visited zoos and admired Black bears and Grizzlies, Polar bears sporting underwater, separated from me by […]

Here are some of the winning photos! Well done to all those who submitted such stunning work, and congratulations to the prize winners of the My Alaska Photo Contest. Winners, you are being contacted individually.  Contributors whose photos got the most votes will pick their prizes according to number of votes received. Some notes on […]