“The science is clear. Without rapid cuts in CO2 and other greenhouse gases, climate change will have increasingly destructive and irreversible impacts on life on Earth.” -Petteri Taalas, Secretary-General, World Meteorological Organization (WMO)

Humans change the world, and in turn the world changes us.

Human consumption of fossil fuels has added carbon dioxide and other heat-trapping greenhouse gasses to the atmosphere. The World Meteorological Organization’s report on the State of the Climate in 2018 notes that world average temperatures are now nearly 1°C (1.8°F) above pre-industrial levels. For humanity, the past four years have been the hottest on record.

We know that climate change is a problem. Stanford professor Jon Krosnick puts it very simply: 1) It’s warming. 2) It’s us. 3) We’re sure. 4) It’s bad. 5) We can fix it. Krosnick’s paper (Krosnick et al., 2006, Climatic Change) elaborates on these lecture points.

In 2015 most of the world’s countries signed the Paris climate agreement, with a goal of “Holding the increase in the global average temperature to well below 2°C above pre-industrial levels and pursuing efforts to limit the temperature increase to 1.5°C.” We already have the knowledge and technology to do this.

Why 1.5°C instead of 2°C? The Intergovernmental Panel on Climate Change (IPCC) report released in October 2018 warned that more devastating fires, floods, and food shortages would accompany average global temperatures higher than 1.5˚C. The poorest and most vulnerable of humanity’s populations would suffer the most. But, if current trends continue, the world could warm to 1.5°C as soon as 2040. To avoid that, influential countries need to get down to business and cut emissions of green house gases right now. That means burning less fossil fuel. Clearing fewer forests. A myriad of complex and drastic changes.

Petteri Taalas, WMO Secretary-General, warned: “We are not on track to meet climate targets and rein in temperature increases. If we exploit all known fossil fuel resources, the temperature rise will be considerably higher.”

The U.S. is turning our back by withdrawing from the Paris Agreement. I hope that stance can change. Rampant climate change will harm the economy far more in the long run than the difficult adjustments that should be made right now.

350.org reports the emission-related numbers in their People’s Dossier on 1.5°C: “According to CarbonBrief, to have a decent shot of staying under 1.5°C we would need to cap our total future emissions between now and 2100 to about 120 GtCO2e. To put this in perspective, the world emits on average 40 GtCO2e every year. The known fossil fuel reserves are somewhere between 2,734 and 5,385 GtCO. That’s between 23 and 45 times more than we can afford. What this means is that we have less around three years of emissions as usual before we hit the budget for 1.5°C.”

We have to drastically cut emissions. One huge leap is to stop extracting and burning fossil fuels, and instead ramp up our use of renewable energy (like solar, hydro and wind).

A Year In The Life Of Earth’s CO2 is a carbon dioxide visualization created by the National Aeronautics and Space Administration (NASA) Goddard Space Flight Center’s Global Modeling and Assimilation Office. Bill Putman, climate scientist, NASA Goddard Space Flight Center, narrates the video. “About half of the carbon dioxide emitted from fossil fuel combustion remains in the atmosphere, while the other half is absorbed by natural land and ocean reservoirs. In the Northern Hemisphere, we see the highest concentrations are focused around major emission sources over North America, Europe and Asia.” Weather patterns disperse the CO2 north. You can watch over time as photosynthesis allows plants to absorb CO2 during the growing season. Putman notes: “As [] plant photosynthesis decreases, carbon dioxide begins to accumulate in the atmosphere. Although this change is expected, we’re seeing higher concentrations of carbon dioxide accumulate in the atmosphere each year. This is contributing to the long-term trend of rising global temperatures.”

Check out this Global Carbon Atlas map of global CO2 emissions: http://www.globalcarbonatlas.org/en/CO2-emissions. The dot representing U.S. emissions is a huge blot compared to many nations. 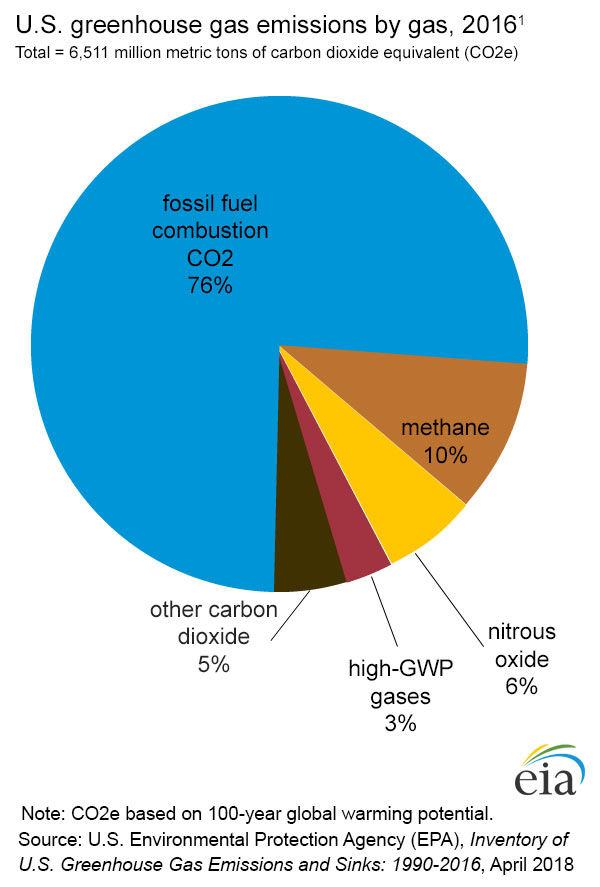 A lot of the CO2 emissions pluming into the skies above the U.S. are from burning fossil fuels. The U.S. Energy Information Administration (EIA) reported that in the U.S. in 2016, CO2 emissions produced by burning fossil fuels for energy accounted for 76% of total U.S. anthropogenic (man-made) greenhouse gas emissions based on global warming potential. This month, as Frontier Scientists remembers the events of the Exxon Valdez oil spill which devastated Alaska’s Prince William Sound 30 years ago, we also look at how oil has impacted world climate. Extracting and burning fossil fuels takes carbon that was sequestered deep underground and releases it into the atmosphere as CO2.

About half of annual CO2 emissions pumped into the atmosphere are then absorbed by Earth’s oceans and by vegetation, which help slow down humanity’s accidental but very real rush to screw over our descendants. But still: ice sheets and permafrost melt, and oceans rise; storms become increasingly severe; people suffer from heat wave, drought, fires and floods. Global warming jeopardizes economies and food security. That’s today. Future generations will face worse. How much worse? That depends on policy we adopt right now.

Of course it’s hard. But we must act. As WMO Secretary-General Petteri Taalas put it: “We are the first generation to fully understand climate change and the last generation to be able to do something about it;” let’s strive to limit warming to just 1.5°C.