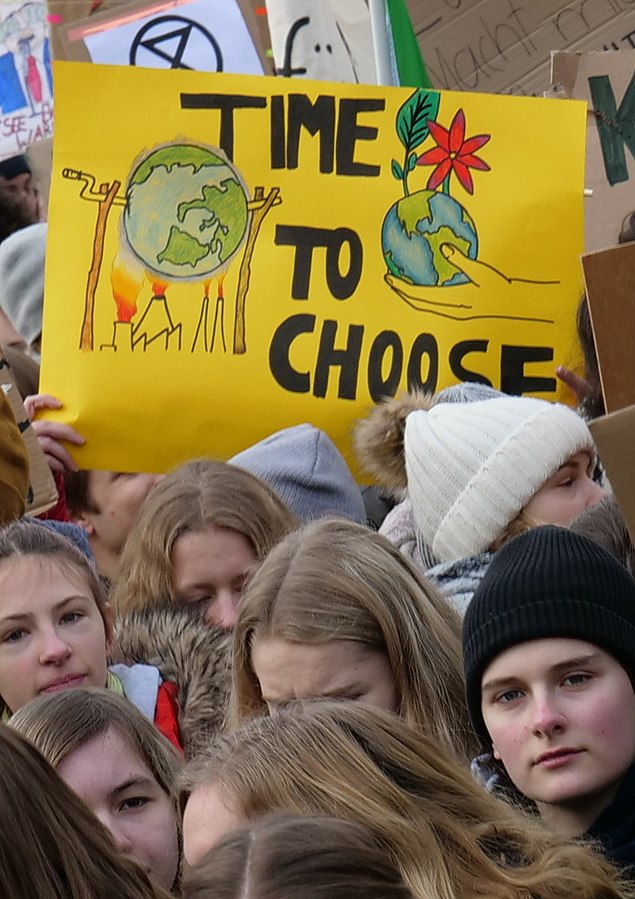 She’s charismatic, blunt, and invigorating. And this sixteen-year-old climate activist has ignited a global movement.

On Friday March 15, 2019, join her in asking for change. Strike near your local government buildings. Thunberg wants everyone to push policy makers, governments, industries, and themselves to take action. Join the Fridays for Future movement, and sign up here: https://www.fridaysforfuture.org/join.

Thunberg addressed world leaders: “I don’t want you to be hopeful. I want you to panic. I want you to feel the fear I feel every day. And then I want you to act.” She says we don’t need hope right now, we need action. “We can create transformational action that will safeguard the living conditions for future generations.” (Thunberg at World Economic Forum, Davos, Switzerland, January 2019)

There’s something refreshing about the teen’s frank delivery. “I speak on behalf of climate justice,” and, “I care about climate justice and the living planet,” Thunberg stated matter-of-factly, with no apparent fear of sounding grandiose. Instead, her message comes off as unifying. Of course she cares—she’s human. For all that, though, the Swedish student has no fear of calling out those in power. “Our civilization is being sacrificed for the opportunity of a very small number of people to continue making enormous amounts of money. Our biosphere is being sacrificed so that rich people in countries like mine can live in luxury. It is the sufferings of the many which pay for the luxuries of the few.” (Thunberg at UN climate change conference COP24, in Katowice, Poland, December 2018)

This month, Frontier Scientists counts down to remember March 1989. The Exxon Valdez oil spill was a man-made disaster which wreaked havoc on the habitat of Alaska’s Prince William Sound. Thunberg’s fight—humanity’s fight—faces off against a far greater man-made disaster: anthropogenic climate change. Anthropogenic climate change is the instigator of rising sea levels, more extreme weather, and shifting conditions which are hurting people already and will only do more harm in the future. It’s wreaking havoc on Earth. And the poorest and most disadvantaged will be the most harmed.

“Today we use 100 million barrels of oil every single day. There are no politics to change that. There are no rules to keep that oil in the ground. So we can’t save the world by playing by the rules, because the rules have to be changed. Everything needs to change. And it has to start today.” (Thunberg at TEDxStockholm, November 2018)

“What we do or don’t do right now, me and my generation can’t undo in the future.” Thunberg wants to make sure everyone knows the realities of climate change. The Swedish student asks students, teachers, and others to strike on select Fridays to push for climate action, including this Friday, the Ides of March. At the time of this posting there are strikers who have pledged to protest in 106 countries. Thunberg herself began protesting in August 2018, and has been foregoing school on Fridays. “I sat myself down on the ground outside the Swedish parliament. I school striked for the climate. Some people say that I should be in school instead. Some people say that I should study to become a climate scientist, so that I can solve the climate crisis. But the climate crisis has already been solved. We already have all the facts and solutions. All we have to do is wake up and change.” (Thunberg at TEDxStockholm, November 2018)

Annual global average temperature is currently about 1° Celsius hotter than an average without human inputs would have been, and we are already witnessing the consequences. The UN Intergovernmental Panel on Climate Change released a report in October 2018 which states global average temperatures will likely rise to 1.5°C above pre-industrial levels by 2030. That temperature increase has severe consequences for life on this planet. The IPCC report looks into disastrous impacts and makes it clear that in years to come, limiting warming to 1.5°C compared to a projected 2°C would greatly benefit humanity. It advises the people of the world take action to make emissions fall rapidly. More on the science side of this, coming up next week.

Thunberg’s Instagram feed urges strikers to “Always refer to science.” She shares the science. “According to the IPCC, we are less than 12 years away from not being able to undo our mistakes,” she stated during the World Economic Forum. “Solving the climate crisis is the greatest and most complex challenge that Homo sapiens have ever faced. The main solution, however, is so simple that even a small child can understand it. We have to stop our emissions of greenhouse gases.” (Thunberg at World Economic Forum, Davos, Switzerland, January 2019)

Although lowering emissions is no easy feat, it seems astounding to the young climate activist that we as a civilization aren’t doing more to meet those goals. Thunberg demands Sweden strive hard to follow the Paris Agreement and adhere to IPCC recommendations. In the U.S., a proposed Green New Deal might help accomplish lowered emissions. “We have to change. Rich countries like Sweden need to start reducing emissions by at least 15% every year, and that is so that we can stay below a 2° warming target. Yet, as the IPCC have recently demonstrated, aiming instead for 1.5°C would significantly reduce the climate impacts,” Thunberg shared during a talk posted on TEDx’s site. “You would think the media, and every one of our leaders, would be talking about nothing else.” (Thunberg at TEDxStockholm, November 2018)

This should be astounding to us, too. Let’s change it.
#FridaysForFuture #schoolstrike4climate #climatestrike March 15, 2019