The Exxon Valdez oil spill on March 24, 1989 fouled the day.  Ray Troll’s summarizes the disaster in his sketch Tanker From Hell. Note the man on the deck of the Exxon Valdez with a bottle in his hand. That’s Captain Joseph Hazelwood, dubbed ‘drunk in a bunk’ because he wasn’t piloting the tanker when the Exxon Valdez hit Bligh Reef, he was  ….

Jack Lamb, Cordova fisherman, Dr. Riki Ott, marine biologist, Erlin Johansen, Mayor of Cordova 1989, and Rick Steiner, University of Alaska professor and Marine Advisor for Prince William Sound Region. recount how they found out about the spill and what immediately happened or did not happen next. Watch 1989 vintage footage as they describe it.

Memories are strong about the Exxon Valdez spill because it affected many people, many animals, fish, birds, and a very productive ecosystem. 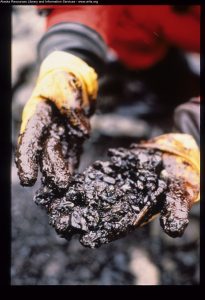 We’ll examine science resulting from research studies through a series of pod casts titled Alaska Coastal Currents. This is a radio series produced by Jody Seitz and Steve Heimel.

And we’ll talk about some longer term studies from the tragedy.

We’ll look at the health hazards from oil spills. The dead animals w 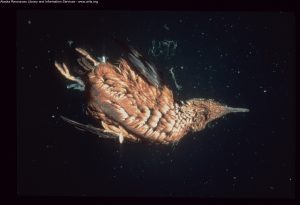 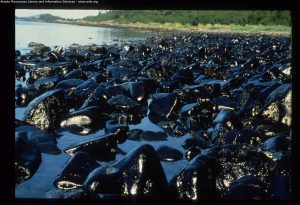 Clinics were busy, 6, 722 clean-up workers went in for respiratory illness.  According to John Middaugh, Alaska’s state epidemiologist, this means 40% of the work force experienced severe enough problems to see a doctor.

This is a series about remembering the Exxon Valdez oil spill and how oil affects us on our planet.