Imagine you are watching an old B-movie with grand and frightening monsters attacking each other for the battle of the Pacific Ocean! It’s not what you would think of when you think about weather and climate is it?

Dr. Nicholas Bond a climatologist with the state of Washington has been credited, but in his words “taken responsibility” for naming a particular weather phenomena over the Pacific Ocean “The Blob”. The blob is a big, well blob of warm water off the coast of the Pacific Northwest and Alaska. The unusual warm water temperatures have been caused by a warmer air mass that meteorologists have found in 2013. The Blob was created at the same time as a strong El-Nino in the South Pacific that another scientist coined “Godzilla”.

With The Blob and Godzilla duking it out, the warm high pressure system persisted in the Pacific for years! Because of the weather feud, Bond’s research found that rising water temperatures affected marine wildlife. Bond said there were unusual sightings of sunfish in the Gulf of Alaska. These fish are normally found in tropical waters.

The Pollock population drastically changed. Bond said that while the older Pollock are still present in the fisheries, the one-year old Pollock have disappeared to other waters, negatively affecting future Pollock catch and other fisheries.

The attack of the Blob doesn’t just end in warm waters and unusual fish patterns. Sea bird die-offs are becoming a major issue on the coasts of Alaska. Common Murres were found dead in piles on the coast of Whittier. Bond says, “at least 500,000 died.”

The question is has this happened before? What is really causing these extreme weather patterns that are drastically affecting marine wildlife? Bond said, weather patterns similar to the Blob have happened before, but what makes the Blob so unique is the magnitude and duration.  The Blob is 3.5 million square miles, “larger than the continental US” said National Geographic writer, Craig Welch. This large mass of warm water was 7 degrees higher than average from 2013 to 2016.

Journalists tend to report it wrong. Even the Washington Post got the causation wrong. Reporters said it was the water warming the weather, when really it was the high pressure system dubbed the Blob. The high pressure system was producing the warmer temperatures and was responsible for taking less heat from the water during the winter of 2014 and 2015 ; thereby sustaining the weather, according to Bond. 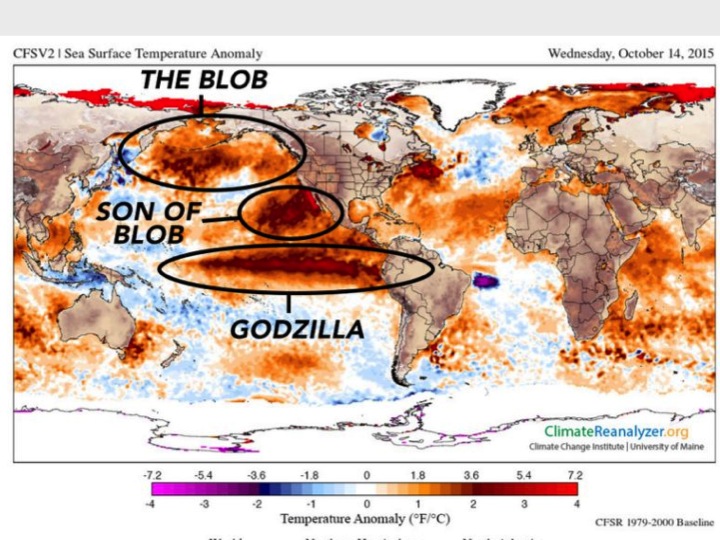 The warmer waters in the Pacific Northwest have created more harmful algal blooms or Red-Tide from southern California all the way up to Alaska. These algal blooms deplete shellfish populations and have closed down many shellfish fisheries.

Why is this all happening? Bond said the blob may have formed from the melting of arctic sea ice that has been going on for many years.

Just as in the old “Godzilla” movie, where Godzilla is formed by the nuclear bomb in Japan; The Blob could be the result of global climate change warming our planet.