For a class in the journalism and communications department at the University of Alaska Anchorage, climatologist Nicholas (Nick) Bond gave a presentation on his work and, more specifically, his studies on a large mass of warm water in the Pacific Ocean, known as “The Blob.” Bond, with the University of Washington, first coined the unusual finding “The Blob” sometime around the late spring or early summer of 2014, shortly after it was discovered in late 2013. The Blob continued to spread and is now stretching across the west coast, swarming the coast from Alaska to Mexico.  Bond further explained how The Blob was found, the explanation for its name, the consequences of its presence and the future of climate change.

“Can we do anything to [reduce] climate change that’s being predicted in the future?” a student asked when Bond opened the floor to questions. Bond’s response stated we are all individually responsible for each of our own carbon footprint, but as a bigger picture, as a society, it would take a “worldwide effort to reduce carbon and emissions that are the prime causes of global warming.” In summary, Bond had two different elements which could be used as a reminder if an individual wants to see and make change: mitigations, making efforts to keep global warming from worsening, and adaptations, realizing the facts and finding a way to make the future effects minimal. 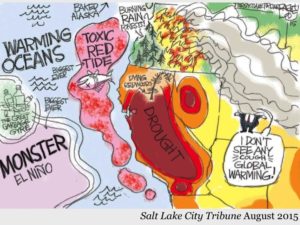 It’s no surprise The Blob is negatively affecting many fisheries on the west coast of the U.S.  A bad weather year will not cause too much harm to most of the fish — but multiple bad years in a row can start to take a toll on the population. In addition to the uncertainty of the fisheries, it’s also causing harm to other marine mammals’ habitats, though not all.

But what about inconveniences for the people? People in villages up north in Alaska are extremely dependent on what they catch at sea. Bond explained how the conditions of the waters have been in favor for harmful algal bloom, which can infect creatures like shellfish, leaving it unsafe to consume, even if individuals try to “cook off” the deleterious toxins.

There is a lot to take away from learning about The Blob, the effects now and the effects it will have in the future. Prompted with the question “What would you say is the number one most important thing to take away from knowing about The Blob?” Bond said it’s how to learn from The Blob. There’s nothing to do to get rid of it now, so we can use it as a learning opportunity. Learning how the marine ecosystem responded to The Blob, taking actions: mitigation and adaptations, understanding what is happening and how it got there among other things can better prepare individuals to adapt to climate change.