In the winter of 2014, a patch of ocean in the Gulf Alaska became much warmer than usual. This occurred due to a persistent area of higher than normal pressure. Over the next two years, the patch increased in size and affected the marine life around it.

Nick Bond inadvertently coined the term “the blob” to describe the patch of warm water during a radio interview. The blob had grown since 2013 more than 1000 miles across, said Bond. This blob is unusual because of its large size and extended duration. Bond considered long data records to analyze the ocean’s temperature cycles. His analysis allowed comparisons between “the blob” and previous warm events in the North Pacific.

Yet, weather does not determine the ocean’s temperature, according to Bond. Similar to the ocean’s cycle of temperature changes through the seasons, the ocean and atmosphere interact in a complicated fashion. According to National Oceanic and Atmospheric Administration (NOAA), the sun’s radiation is absorbed by the ocean. This means it stores the solar radiation from the sun and distributes it via currents throughout the globe. “It is a constant cycle,” says Bond. There is no predominant instance when the temperature of the ocean consistently causes unusual weather patterns. 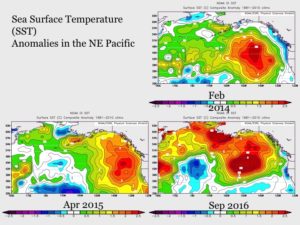 The blob was prominent from 2014 through 2016, and conditions are returning to closer to normal temperatures. Although the temperature is returning to normal, it continues to have impacts on the ecosystem. From California to Alaska, many species have been malnourished, overheated, and dying. According to Bond, for example, fin whales have been affected by warmer temperature. Fin whales have been dying and washing up on the shores of Kodiak island cooked by the ocean’s warm waters. The typical mortality rate for fin whales per year is eight, but the deaths have increased to at least a dozen by 2015, as documented by NOAA.

Along with an unusually high number of fin whales’ deaths increases, juvenile Coho salmon have been small and skinny in size. Coho salmon are unusually malnourished because of the lack of subarctic copepods in the warmer waters. This, in turn, harms commercial fishing. An important livelihood for many Alaskan communities is fishing. Lack of fish can be trouble for those villages that rely on these resources. The warmth of the ocean also created harmful algal blooms, which infect fish and shellfish and can eventually have toxic effects on marine mammals and humans.

The blob is currently winding down, but it has created harmful effects, especially for fishing communities like Kodiak Island. If the overly heated Gulf of Alaska continues, Bond believes that some islands and villages would have to relocate when erosion starts to affect their livelihood. Although this can affect the livelihoods of Alaskans, erosion is much more of a problem for northern communities along Chukchi and Beaufort Sea.

As we study and anticipate the future of the blob and its affect on people, marine life, fishing industries, and the weather, Bond wants to encourage people to take small steps to minimize our carbon footprints. It will take a collective body of people to acknowledge and participate in the action to do so, meanwhile Bond and other environmental scientists continue to analyze and observe what is happening in the waters of the Northeast Pacific off the west coast of the U.S.