Something unusual happened off the West Coast in the Pacific Ocean, a warm patch of water referred to as “the blob.”

Nick Bond, state climatologist for Washington and researcher for the Joint Institute for the Study of the Atmosphere and Ocean, coined the term in 2014. He describes the blob as a circular area of water that formed where sea level pressure was abnormally high. It became nearly 300 meters deep and occupied a large part of the northeast Pacific into the Gulf of Alaska.

“There was this big, really persistent block of higher-than-normal pressure… and as a result: less wind, and wind from unusual directions,” Bond said. “What I was also noticing was that the water there was quite a bit warmer than normal.”

Though oceans do have seasonal changes, anomalies like this are not typically this large.

Along with less cooling of the waters in the winter, the winds carried heat to the Pacific coast states, Bond said. This contributed to warmer weather in the Pacific Northwest and coastal Alaska. 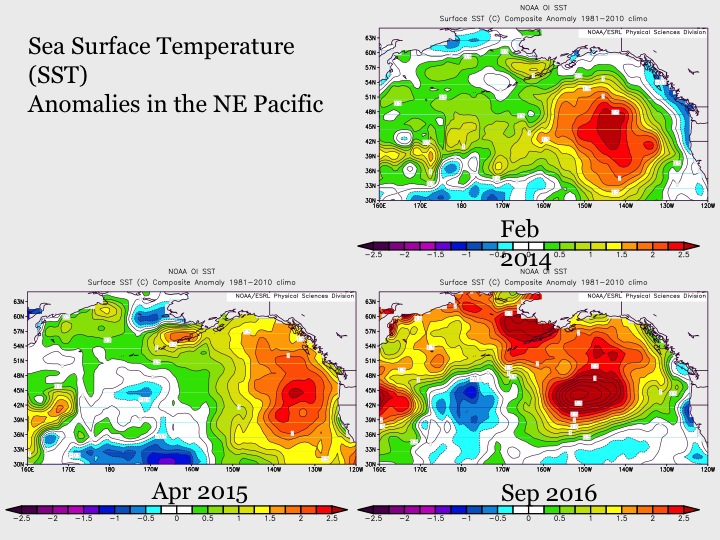 “In terms of the geographic scope and the duration of this event, it’s a record set. We haven’t seen anything like it of its magnitude and extent,” Bond said.

Climate maps of the Pacific Ocean have shown changes in weather over the years since 1958. Warmer spots have slowly grown as cooler areas have shrunk. Although the blob made its appearance in 2013 and caught scientists’ eyes, it has cooled down since its maximum intensity in 2014-2015.

The blob’s effects have been shown in the marine life as well. Tropical fish were found in the Gulf of Alaska, a body of water that isn’t their usual habitat. Sea birds were dying off along the West Coast, such as nearly 500,000 common murres that were found on a beach in Whittier, Alaska. The National Oceanic and Atmospheric Administration announced an unusually large number of deaths of whales, and other mammals were suffering from malnourishment.

In turn, this can affect rural communities in Alaska that depend on a subsistence economy. Since their ways of life are connected to the state’s natural habitat and waters, the imbalance caused by the blob can hinder this.

Bond says he is unsure of what may happen with the blob. It has cooled down since 2015, but it could still have lasting effects.

“We don’t know exactly what’s going to happen,” Bond said. “It has, for the most part, wound down. By 2016, it was kind of on its last legs but there’s still some lingering heat there.”

Researchers are tracking its effects on the ecosystem and whether these effects will be long-lasting.

The blob serves as a reminder of how ecological problems affect everyone and the habitat they live in. Bond says it is not something to be ignored and people should pay attention.

These kinds of environmental issues, including those outside of the blob, need to be discussed in the community and even in politics, Bond said. Instead of treating science and politics as separate entities, we should consider how impactful they can be together. Scientists should “be advocates and help be a source of information.”

“I don’t think science and politics are completely divorced… I think it is important that good political decisions are made with accurate information and that those decisions shouldn’t be made in a vacuum,” Bond said.

For now, scientists are keeping watch on the blob. It isn’t affecting other weather patterns across the world, but the opposite may be true.

“We’re continuing to see, obviously, some unusual weather around. One of the hot topics is the sea ice in the arctic,” Bond said.

He says there is speculation that melting sea ice might have helped cause the unusual weather patterns that produced the blob. Although it is a complicated connection, scientists are continuing to explore that potential and whether events of a similar sort will occur more frequently in the future.