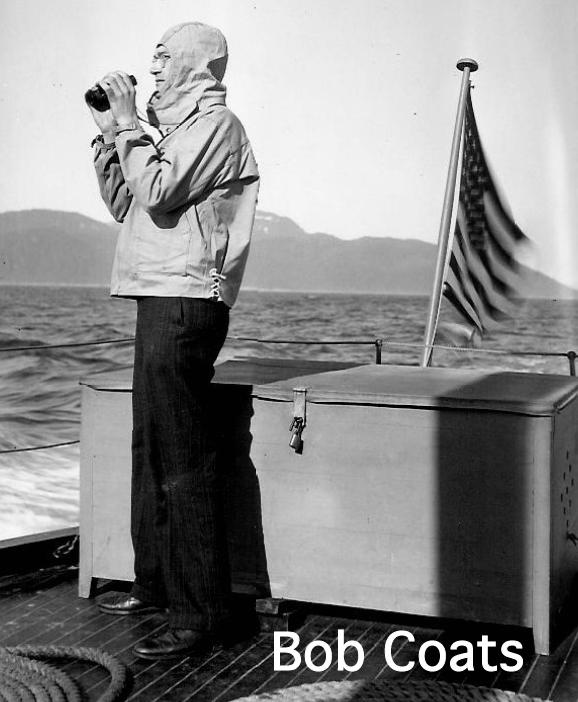 Sometimes, a great idea arrives ahead of its time. A person squints at a raw landscape, thinks about it in his bunk on a heaving ship, dreams of it. He scribbles a diagram. He remains quiet years later as others rediscover the same thing.

Such was the case of a rugged geologist who island-hopped in the Aleutians following World War II. Thinking about the age of rocks he found, the placement of a string of volcanoes and how they were linked with the depth of earthquakes, Bob Coats arrived at this notion: the sphere of Earth is constantly eating its own plates and regurgitating them back out. At those explosive boundaries, now called subduction zones, volcanoes often ooze to the surface.

“He solved a major problem that wasn’t known to be a problem — where’d the skin (of the Earth) go?” said the late scientist’s friend, David Scholl. Scholl is a seasoned geologist who recently visited Fairbanks. At the end of Coats’s career, Scholl had an office just down the hall at the USGS headquarters in Menlo Park, California.

Scholl, 82, thinks it important that his friend get credit for his prescient idea. It is a story of how an Alaska mystery shed light on tsunami-causing forces deep within the Earth.

At Menlo Park, the USGS had an “Alaska Branch” to which Coats was assigned. Coats was familiar with the state because he worked at the university in Fairbanks in 1937.

Just after World War II, Okmok Volcano on Umnak Island erupted, spitting ash in the air. Volcanic ash is abrasive and damaging to aircraft engines. Planes on a military base at Umnak were grounded.

Officials at the War Department needed more knowledge about the volcanoes that make up almost every island in the 1,200-mile Aleutian arc. They funded the Alaska Branch to send up Coats and others. On the “reconnaissance geology” trip, they would map a few islands and perhaps learn when they might erupt.

Aboard the 78-foot schooner Eider, built in 1912 to aid seal hunters of the Pribilof Islands, Coats sailed the length of the Aleutians. The team stopped to study many islands. Several questions popped up: When were the islands made? How did this enormous chain get built?

Coats knew that Earth’s mantle, the thick layer beneath Earth’s outer crust that makes up 84 percent of the planet’s volume, melts when water comes in contact, inspiring the rise of lava. He knew the immense Aleutian Trench lay just offshore and to the south of the islands. He found that volcanoes farther from the trench were older, and that seismologists mapping earthquakes found they happened deeper as distance increased from the trench.

On a cold, moist Aleutian evening, Coats had the epiphany that one of Earth’s giant plates was sliding down beneath another, pulling water as it went. He sketched a diagram showing Earth’s plates meeting beneath the islands, as others had. But, unlike the others, he included arrows that showed movement: what we now call the Pacific Plate diving beneath the North American plate, causing earthquakes and forcing up molten rock, sometimes enough to make an island.

His idea solved a problem. As Earth’s crust expanded, where did it go? Unless the planet was growing larger, the crust needed to go somewhere. Nobody paid much attention to the subtle idea in his paper.

“He published the diagram and nobody gave it a damn,” Scholl said.

Seven years later, at a conference in Asilomar, California, scientists borrowed the Latin/French term subduction, “drawn from below,” to describe what happens beneath Alaska and other places at the boundary of Earth’s giant plates.

“Years before we met at Asilomar, a big part of the puzzle had been solved,” Scholl said. “It was stepped over by a community of scientists.”

Scholl said Coats did not mind not getting full credit for the idea, probably because his close colleagues, like George Plafker who did so much work on the 1964 Good Friday Earthquake, had read Coats’s work and based his interpretations on it. And because Coats was satisfied with what he had done in the 1962 paper and had no need to trumpet the idea.

“The diagram he drew of the Aleutian subduction zone applies to others all over the Earth,” Scholl said. “And it all came from a little cinder cone in Okmok Caldera huffing and puffing.”

Alaska Science Forum. Since the late 1970s, the University of Alaska Fairbanks’ Geophysical Institute has provided this column free in cooperation with the UAF research community. Ned Rozell is a science writer for the Geophysical Institute. Posted by Ned Rozell on September 29 2016 http://www.gi.alaska.edu/alaska-science-forum/earths-expanding-crust-swallowed-beneath-aleutians