“Doing science in the Delta is more than just coming up with interesting questions and implementing them. It also requires a lot of on-the-ground work and pre-season preparation in order to be out here for as long as we are.”

A five month field season in remote Alaska is no deterrent to Ryan Choi. “I actually really love being out here,” said Choi, Department of Wildland Resources PhD student under advisor Dr. Karen H. Beard, S.J. & Jessie E. Quinney College of Natural Resources, Utah State University. Choi has been committed to field work in the Yukon-Kuskokwim Delta in western Alaska for years. “It’s an incredible place to spend the entirety of a summer, season after season. I feel very fortunate to have the privilege to call this place home for a short while,” Choi told Frontier Scientists. “Not many people get the chance to do something like this.”

Choi related “Our field season is exceptionally long; it’s a five month field season. We arrived here in early April and we’re here until the beginning of September. The entirety of the spring and summer.”

Choi and colleagues’ camp (dubbed Tutakoke Camp) sits along the Tutakoke River, a windy tidal slough that flows inland in the Yukon-Kuskokwim Delta near the eastern edge of the Bering Sea. It’s about 600 miles west of Anchorage, Alaska. “When we arrive here at the tail end of winter it’s hard to even know that there is a river here, everything is just snow and ice,” Choi described. 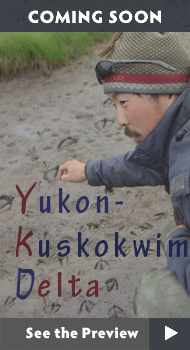 Before setting up camp Choi and colleagues retrieve gear stored in the City of Chevak. They strap the gear to snowmobile-towed sleds and shuttle everything to their research site. “We have to haul all of our scientific equipment, our supplies, our camp, our tents, our fencing, all of our scientific gear, all of the things we need for taking measurements out here, as well as all of our food. Everything we need for a long field season.”

Every year they aim to arrive “At the tail end of winter,” and “Spend about a week hauling things back and forth on the frozen tundra. It’s about 20 miles from town to camp. And we spend a whole week just packing things up, tying them down on sleds and then hauling them out to our remote camp.”

This year the scientists set out the first week of April.

Choi named timing camp set-up as one of the biggest challenges of the project. “Even though it was our third year it was a big problem to get here on time,” he said. Scientific camps in the area traditionally set up around the end of April. “But the last three winters have been so variable with so little snow that we’ve actually had to change our start date from what’s been done in the past. This year was the earliest year we’ve attempted to come out to install camp.” Choi said “Had we come any later we would have run into some serious challenges.”

The route to haul gear by snowmobile goes 20 miles overland. In contrast “When we come out by boat, it’s almost an all-day trip going up and down four different rivers about 70-90 miles and you can haul a lot less stuff. And we are a lot more at the mercy of the winds and tides, as well, which are a big challenge out here,” Choi said.

The early set-up date this year allowed the scientists to take advantage of frozen waterways and snowy tundra. They need the snow to fulfil requirements as basic as drinking water.

So close to the coast, salt water flowing into the river slough not 30 feet from the weather port’s front door means the river carries muddy, salty, non-potable water. Instead the team relies on water from melted snow. “One of the things we do early season is to take all the totes that we pack our food in, and to empty those out and put them in our food port and then pack 50 Rubbermaid totes of snow which serves as our drinking water for the entire summer.”

“This year the river broke up beginning of the second week of May, and that was unusually early. A lot of the locals were really surprised; it’s about a month earlier than typical break up. And unfortunately this is becoming more and more the norm,” Choi said. “Rivers are breaking up earlier, making it more challenging for people to get around on their snow machines. It’s made it a lot more challenging for the local Native hunters to go out seal hunting with the reduction of sea ice, making it a lot harder for them to do their subsistence hunting out here in the wintertime.”

“And it also makes it a lot harder for us to get out here safely. Like I was saying earlier, we cross four different rivers to get out to camp. And there have been some close calls driving snow machines across sometimes sketchy ice. Makes it a little bit hairy.”

Once they reach camp the scientists face the challenge of erecting shelter. They work to set up weather ports: shelters erected atop wooden tent platforms to provide five months of respite from wind and storms, a place to keep a stove and to sleep.

The weather ports need to be paired with wooden platforms. The platforms are left on-site all year staked to the ground. To reveal them, the scientists must dig through snow drifts then chip through several inches of solid ice. The plywood and lumber platforms which serve as bases for their tent-like weather ports are the only things the team leave behind during the winter. “We strap those down to duck bills and use ratchet straps and ropes to keep them locked down and in place over the course of the winter.”

The reason the scientists have to clear supplies out of camp every winter is storm surges.

The United States Geological Survey explained: “Coastal regions of Alaska are regularly impacted by intense storms, the frequency and intensity of which are expected to increase as a result of climate change. In this region lies the Yukon-Kuskokwim Delta, one of the largest deltaic systems in North America, and home to thousands of Native Yup’ik and Cup’ik Alaskans and the birds, fish, and marine mammals they depend on for nutritional and cultural values. The low relief of the YKD makes it especially susceptible to storm-driven flood tides and increases in sea level.” [USGS News Release]

Choi confirmed: “In the fall out here in the Delta, there are often storm surges that come onto the land… the Bering Sea will actually come in, sweep over the land and inundate everything in the process. As you’ve seen out here, it’s pretty flat and [there’s] not much to stop any sort of flooding. And so anything that isn’t locked down can wash away and you’ll never see it again.”

Over the past winter, storm surges were so strong they moved tied-down weather port platforms. The camp’s tide gauges showed “There were 4 or 5 floods that came out here and washed over the land. And during one of those events there was enough force—enough water that actually re-arranged some of the platforms that we had tied down last fall,” Choi related. “So that was a surprise.”

Storm surge trends increasing in frequency and strength drive water against coastlines, causing flooding and disrupting ecosystems. They promote erosion. They deposit sediment atop plant growth, and can inundate freshwater habitats with salt water. Choi related: “I believe in 2005 there was a storm event that deposited 10 centimeters of mud all over part of the Delta and we lost a good chunk of grazing lawn along the coast here in a single event.” Grazing lawns provide food sources in the Yukon-Kuskokwim Delta relied on by visiting birds. Regarding “Frequent climate scenarios and more frequent storm surges coming in off the Bering Sea it is likely that it may alter these vegetation communities out here in the near future,” said Choi.

Increasing storm surges also prove to be a hassle for residents of Chevak. That’s the city where the scientific team stages equipment before shuttling supplies to camp. “Last fall and over the winter there were some high flooding events that actually flooded the land in front of Chevak and rearranged the boats,” Choi described. Due to these events the science team’s boats were locked in 2 feet of ice. “When we came back out here in the Spring, we just saw the keel of the boat sticking out of the snow and we had to spend a good portion of almost a week chipping and cutting the ice from the boats, but unfortunately we were unable to extract them in time before we had to be in camp for mobilization.”

“That was a real disappointment but we made it work: we were able to get a ride back from one of the local guys,” Choi said. “After break up he came out to camp and picked us up.” That assistance was vital because the Yukon Delta is riddled with waterways. “With the amount of water out here and the distance between towns the boats are a crucial piece of equipment,” Choi said, “It’s like the pickup truck of our field camp.”

“The Yukon Delta is at the forefront of climate change research,” Choi stated. “We are right here at ground zero. The ocean comes right to the doorstep here and we are at sea level. There have been times when the ocean has been on the land and any increase in sea level would flood out our weather port while we are living here.”