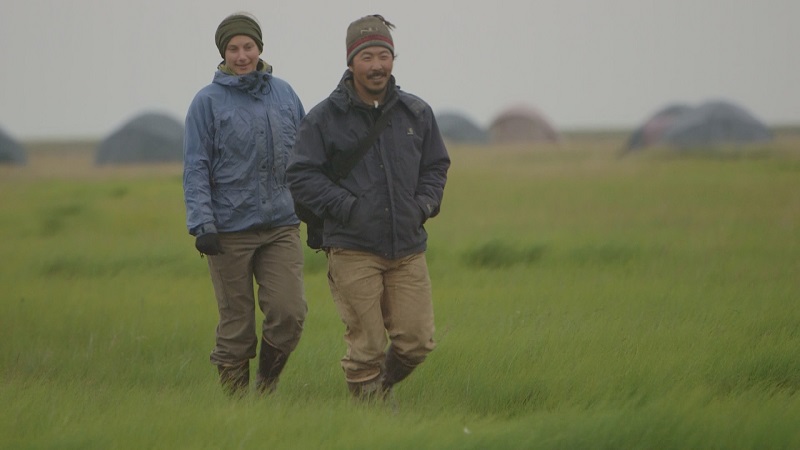 “A lot of Arctic and sub-Arctic regions are experiencing the effects of climate change more than areas at lower latitudes. So that is an important thing to communicate to the public,” Kathy Kelsey said. Kelsey and colleagues are “On the ground watching some of the large changes as a result of climate change.”

Kathy Kelsey is a postdoctoral researcher at the University of Alaska Anchorage. “We call our camp the Tutakoke camp or abbreviate it as Tut.,” Kelsey told Frontier Scientists. The camp sits in the Yukon-Kuskokwim Delta (YKD) in western Alaska on the coast of the Bering sea, some 600 miles west of Anchorage.

For scientists at Tut. camp, change is an important word. And with stays up to five months in the field they can be exposed to a lot of it. In the YKD warmer temperatures are pushing winters out of the way early in favor of spring, and plants are responding by growing earlier. That has major implications for the multitude of migratory birds which wing their way to the YKD every year.

“If we want to talk about our project in a sentence it’s easiest to say we are investigating phenology,” Kelsey told Frontier Scientists. So what’s phenology? “Phenology refers to the timing of various biological processes throughout the year,” Kelsey explained. “Phenology might refer to when plants perform certain activities: when plants start growing, when plants produce a flower, produce a fruit, or lose their leaves for the fall or grow new leaves in the spring. But it can also refer to timing, for example, of migratory species. In our case: When do birds arrive on the landscape? When do they initiate their nests? When do the goslings first hatch and then when do the birds leave the landscape again in the fall?“

The Yukon-Kuskokwim Delta is “A really important breeding area for water fowl and for swans and eiders and geese,” Ryan Choi stated. Ryan Choi, PhD student at Utah State University, was camp manager of Tut. camp responsible for project logistics for the last three years. He noted the YKD is a “Very vulnerable place,” because it sits close to sea level, making it vulnerable to flooding. “The Yukon Delta is at the forefront of climate change research,” Choi said. Changes to this area will impact local humans, local wildlife, and feathered travelers from across the world: “Millions of birds breeding and living out their lives here and raising their young.”

During Alaska’s brief summers, regional plants grow on a schedule guided by snow melt and influenced by nutrient availability. An earlier snow melt foretells earlier growth. “It is shocking how fast green-up happens out here,” Choi related. “Plants have a very short window in which they can invest in photosynthetic material and reproduction, and every day you go outside, you can almost watch it get greener by the hour.”

Migratory birds need to breed, lay eggs, raise young, and eat enough to accomplish their fall migration. For herbivores all of that has to happen during the narrow window of plant growth. Ideally, birds synchronize reproductive activities and offspring rearing with the height of food abundance. In the case of earlier green-up, it would be beneficial for birds to initiate nesting earlier.

It’s not easy to keep pace when you’re a migrating species; the birds can’t check weather conditions in Alaska from wintering grounds in the south. If their migration doesn’t arrive early enough or their genetic makeup doesn’t allow the behavior- and hormone-wrangling gymnastics required to tweak the timing of reproductive activities they miss the ideal window when plant growth is booming, and are less likely to successfully raise young.

Trophic mismatch describes this state, one in which interacting species’ life cycle events fail to line up optimally. Trophic mismatch can cause consequences which echo through ecosystems.

Kelsey described how the scientists at Tut. camp are investigating not only the broad strokes of climate change, but also “More nuanced, potential changes in the arrival of these migratory animals and the potential mismatch that this creates if the timing of their arrival is changing differently than changing vegetation.”

Kelsey: “We are looking at two different types of changes that are taking place on this landscape. One is the advancement of the growing season.” Alaska temperatures increased at a rate twice the national average over the past 50 years, rising 3.4°F overall and a whopping average of 6.3°F during the winter (Alaska Fact Sheet https://www.whitehouse.gov/sites/default/files/docs/state-reports/climate/Alaska%20Fact%20Sheet.pdf). Warmer temperatures occurring earlier in the spring jump-start plant growth: an advanced growing season.

Advanced growing seasons challenge organisms which rely on plants to keep up. “The big problem seems to be less predictability,” Choi said. Winters disappear swiftly — unless they don’t. Climate change doesn’t stop the occurrence of outliers, nor of severe weather events, and may contributing to more frequent and severe storms. Choi: “Unfortunately, the predictability of the time they need to be up here is a lot more variable.” Due to that variability, migratory birds are less likely to arrive at an optimal time.

“If this trend continues, the discrepancy between arrival dates and times could have long lasting implications for the bird populations as well as the vegetative communities that they rely on,“ Choi said.

The researchers at Tut. camp want to know what impact an advanced growing season—interacting with changes in the arrival times of birds—will have on vegetation in the YKD, and how those changes will influence nutrients and important greenhouse gasses.

In order to learn more they’re researching migratory geese. Kelsey noted “There is a lot of area in Alaska that is affected by migratory geese, and so understanding interactions between their grazing (their forage habits) and climate has a large effect.”

Researchers at Tut. camp are involving a specific goose species, the Black brant, in their investigations. Choi explained “This is a very important area for Black brant breeding and habitat use.” Choi credits Jim Sedinger and his group at the University of Nevada, Reno for a brant study stretching 30 years. “They have accrued a massive data set spanning multiple generations of geese out here and they are able to track changes and have a pretty good idea about the population over time,” and “Building upon their existing research, we have expanded our question into looking at: how are Black brant affecting the landscape and how is climate change potentially affecting Black brant in this project. We are using brant as a tool, looking at the timing of grazing, [and] at impacts in relation to accelerated advanced growing season in the vegetation.”

Black brant research records show “Over the last 30 years, the geese out here in the Delta have been changing their arrival time. If you look through the records, the average arrival date for the birds out here has been slowly been getting earlier over the years.” Choi pointed out there has been some variability, but he can highlight a long-term trend of earlier arrival. Meanwhile, “Spring is also arriving earlier,” Choi said: “They seem to be tracking each other, but spring seems to be arriving a little bit faster.”

“By traveling 1,000 miles,” flying the long path from wintering grounds in Mexico’s Baja California and along North America’s western coastline, Black brant “Invest a lot of energy and resources to get all the way up here,” Choi said. “They are trying to optimize their arrival time to match up with the availability of greenery and vegetation so they can lay their eggs and rear their young.”

“There are lots of different ways in which this mismatch of timing could affect the overall environment,” explained Kelsey. “If the geese arrive later relative to vegetation growth there are all kinds of different changes to biogeochemical cycling that could occur as a result.”

I had no idea geese had such impact. The scientists are collecting enough info. on phenology, biogeochemistry and climate change in the YKD to fill a buffet; coming up, we’ll dig in more.