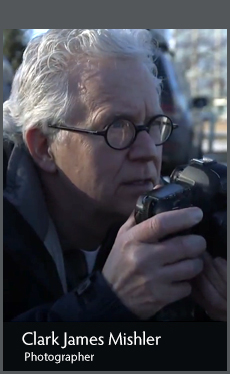 Alaska became a state in 1959. Clark James Mishler, eleven years old and living in the Detroit area, decided right then he wanted to move to Alaska. He made the dream a reality after college and formed a career capturing images of Alaska through documentary film and photography.

“The still image was my favorite by far. It was the thing that brought the most joy to me,” he related. “And here I am, I’m an old guy now and I’m still doing it, and still loving it. I get out of bed every morning and go ‘Yes, let’s do it again.'” Photographer Clark James Mishler shared: “Alaska for me as a photographer has been just fascinating.”

Mishler told Frontier Scientists “Some of my favorite work has been documenting the people in the S.W. Alaska Yup’ik village of Kwethluk. He’s also in the seventh year of his Portrait a Day project. You can review his portraits online at: www.clarkjamesmishler.com and see more photographs by Mishler on his website: www.mishlerphotos.com.

“It is interesting to me now. I can imagine how interesting they will be 50 to 100 years from now.” Mishler said: “I think an anthropologist of the future looking at these pictures will probably say, oh, it’s a little microcosm of Anchorage, Alaska immediately after the turn of the century.”

“I think what would be fun is to have somebody in the future go around to these same places and take the same picture. It would be great to compare the clothes, architecture, weather and other items on that date. Do they have 5 inches of snow, 10 inches of snow, or no snow at all on this date?”

Similarly, “I wish that somebody had done this 100 years ago,” Mishler related. “We have very few photographs of people who lived here 100 years ago. Those images that have survived are coveted, interesting and rare.”

As a photographer based in Anchorage Mishler had “The ability to get out into rural Alaska and to observe firsthand some of the changes that were taking place across the state.” He noted: “Change in Alaska seems to go in leaps and bounds… leaps forward where people are making vast changes to their lives based on what’s happening in Alaska…items not happening anywhere else in the world.” Mishler said “To have been a photographer in Alaska these past 30 years has been great fun.” Mishler is constantly improving his photography and anthropological skills “To make meaningful imagery while involving my subjects.”