“All you have to do is fly over the Arctic to see the tracks of vehicles. And it’s a long lasting effect: there’s tracks from vehicles that were driven out 50 years ago. It doesn’t recover very quickly. In that sense it’s pretty fragile.”

Permafrost has been called permanently frozen soil. William Cable, research professional and masters student at the University of Alaska Fairbanks Geophysical Institute, defined permafrost as: “Permafrost is any ground– anything that is subsurface, soil or rock– that is at or below 0 degrees Celsius [0°C = 32°F] for more than 2 years. If at any time during those 2 years it gets warmer than 0°C then it is not permafrost.” Permafrost ground is generally topped by what’s called the active layer: soil which thaws in the warm seasons and is frozen during winter. Cable described the active layer as “Typically this seasonally-frozen layer on top of permafrost. And this is called the active layer because this is where most of the biological activity takes place.”

Vehicle tracks from years past mark the tundra surface over permafrost on Alaska’s North Slope. “We see this when someone drives a four-wheeler across the tundra and compresses this nice sort of fluffy organic material,” Cable said. It “Often kills this organic layer, kills the moss. And pretty soon after that you see this area start to sink and collect water. That’s because the ground beneath it is warmed and the permafrost is thawed and that permafrost is melted, gone away,” the ice components turned into water, leaving a depression which continues to collect water.

Permafrost and the complicated ways permafrost is changing is important. In the Arctic “There’s a lot of interest in permafrost.” Cable has found “Almost every research field to be in some way concerned about the permafrost because everything is happening on top of it. Yeah. It’s important.”

Cable: “There’s a lot of carbon in the permafrost. So the thing that people are concerned about is: as the climate warms the active layer begins to deepen. As it deepens it’s getting into permafrost. This permafrost has been frozen for thousands of years. The carbon has been locked away in this permafrost. As it becomes thawed then it’s available for microbes to decompose. When microbes decompose carbon it’s converted to CO2 and Methane and these go into the atmosphere. And everyone knows these are greenhouse gases.”

The full picture of permafrost is merely hinted at in patterns that can be spotted across Alaska’s North Slope and in places throughout the Arctic. In this Frontier Scientists video, explore the permafrost patterns which dot the Arctic tundra…

Featured: Vladimir Romanovsky, a professor in Geophysics and professor of geology at the University of Alaska Fairbanks Geophysical Institute.

Featured: Ronald Daanen, assistant professor at the University of Alaska, Fairbanks at time of filming (2012).

Winter temperatures cause soil to contract, forming cracks. The seasons turn to spring, when snow melt water infiltrates the cracks and– influenced by the temperature of underground permafrost– freezes to form ice wedges. Water, unlike most compounds (i.e. soil and organic matter in the tundra) which contract when they freeze, actually expands when it freezes and forms ice. If you were to take a cross-section of an ice wedge it’d be shaped like an extremely narrow pizza slice poked point-first into the ground.

In winter cracks form again, usually in the same place, even forming a fissure in the existing ice wedge. Then in spring more water gets into the cracks, enlarging the ice wedges. In time the ice wedges get so big that they push the material above into ridges that can be seen forming geometric shapes on the tundra.

Cable: “This crack again fills with water and freezes. And so over hundreds, thousands of years this crack get bigger and bigger and fills with more and more ice and this creates an ice wedge. That’s what creates this polygonal landscape.” 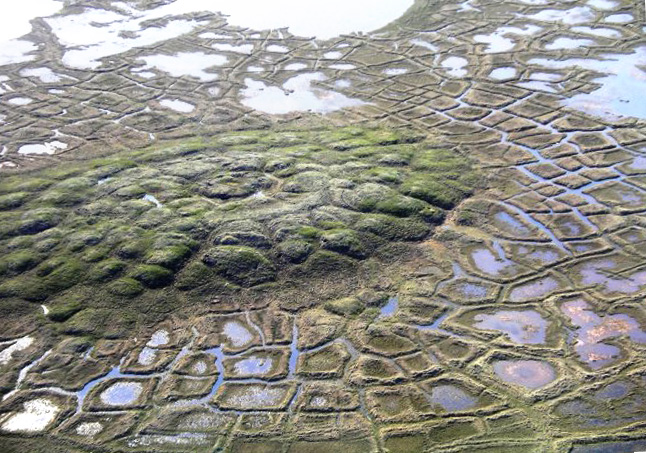 “As the ice wedge forms it’s pushing up the ice on either side of it and so you create some microtopography, is what we call it, so very small topographic relief. And this topographic relief creates areas that collect water,” Cable said.

The edges of the polygonal puzzle pieces are usually higher than their centers, creating little walls that gird the depression. Snow gets trapped in that depression during the winter, when Arctic winds blow snow across the tundra. “During the winter the lower areas tend to fill with more snow,” Cable described. “The snow insulates the ground and keeps it warmer. In turn, the permafrost under these areas tends to be warmer. So it’s really in the way that they create this microtopography that it’s important for permafrost,” and the plant life and ecosystems that permafrost support.

“On the Arctic Coast everywhere has permafrost, it’s continuous permafrost. So what makes a difference in temperature is this microtopography: areas that collect snow, areas that are wetter, these kind of things,” Cable explained.

In contrast in Interior Alaska, like the areas near Fairbanks, permafrost dynamics are more strongly influenced by the vegetation communities growing in the area. “Vegetation can help permafrost occur, but it can also keep permafrost from forming in a location,” Cable said. “That’s something I find interesting because you can have two areas that are very nearby each other. One can have cold permafrost and one can have no permafrost at all and the only difference is the vegetation on top.”

One consequence of changing permafrost is changes in Arctic habitats. Part of what scientists hope to better define is how the Arctic landscape and the ecosystems it supports will change as permafrost thaws. For some places, the changes will be dramatic.

Subsiding into the sea

“What will happen to the environment when permafrost is thawing?” posed Vladimir Romanovsky, professor in Geophysics and professor of geology at the University of Alaska Fairbanks Geophysical Institute.

The upward part of permafrost on Alaska’s coastal plain holds a lot of ice. The volume of ice-rich permafrost soils will decrease as rising temperature trends in future years cause ice to melt. Romanovsky conjured Arctic coastal permafrost destabilizing as ice melts and water runs off to join rivers and ocean: “If you have some 10 meters of icy permafrost and it will thaw, ice will melt, and 70% of volume will just run away. If you have 10 meters, 7 meters will run away,” leaving three meters. Romanovsky said “You will have subsidence of the surface 7 meters [deep]. So what is 7 meters for this Arctic lowlands? Well it’s very easy to imagine that the land surface will be below sea level because the elevation of these areas is just a few meters above the sea level. If it is 4 meters elevation, and then 7 meters of subsidence, you will be minus three. You will be three meters below the sea level.”

The change will convert freshwater ecosystems on Alaska’s coastal plain to a land submerged in shallow ocean salt water. That means “Big changes for everybody, for all plants and animals that live there,” Romanovsky said. “And it will be big changes for people of course as well.”

He clarified “It doesn’t mean that all [of Alaska’s] North Slope will go under sea water but some regions may.” Romanovsky pointed to examples in the Yukon-Kuskokwim Delta where subsidence has already brought ground levels so low that sea water is covering land.

While some higher elevations areas will not be inundated by sea water, Romanovsky repeated “Some of the lowlands could be actually disappear under sea water.” That has severe implications for local ecosystems, plants and animals, subsistence hunters, local communities, regional industry and transportation.

Gathering permafrost data to input into supercomputer-driven models (simulations) helps refine predictions of what land we’ll lose to the ocean. “So this is kind of a very new thing, people don’t think about it.” Romanovsky said “For example there’s … environmentalists who are fighting to protect this wildlife refuge, well, some part of it could become an ocean. And they can’t do anything about it.”

Romanovsky: “Some things you can preserve, and some thing you cannot do anything about.”

The scientists call for continued permafrost monitoring and measuring. Cable: “Because we don’t have a big handle on how much carbon there is, we don’t exactly know what’s going to happen when the permafrost warms up. …How quickly this carbon can be released into the atmosphere. And we know these greenhouse gases in the atmosphere will make it warmer. And the Arctic is warming much faster than anywhere else in the world. It’s sort of a nasty feedback loop. And it has the potential to accelerate, as well. So I think the reason the general public should care is because we don’t have all the answers yet which is why we should continue to study and learn all we can.”

I hope we can put the information scientists have already given us to good use. “Some things you can preserve, and some thing you cannot do anything about.” The more we delay impactful action, the more things slide from that first category into the second.