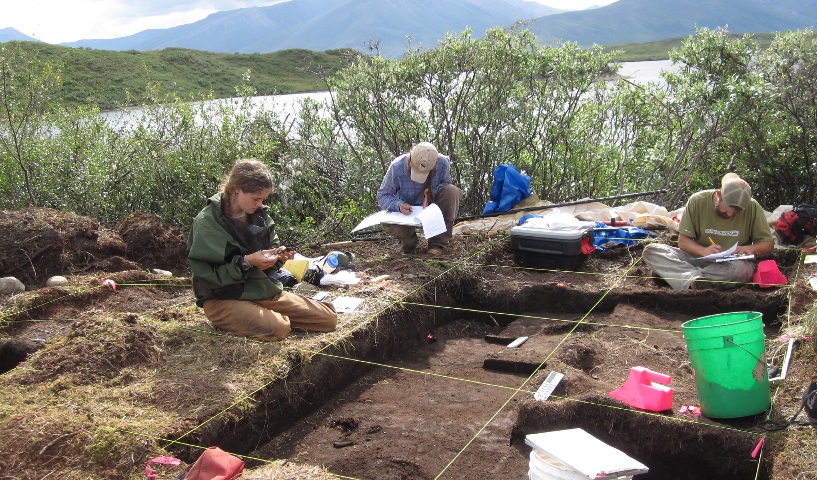 The countryside around the excavation is “A lot of tundra and tussocks, it’s a lot of swampy material, a lot of inlets and outlets. I’ve actually walked all around the lake which was a day–long process.” Joe Keeney said “It’s just a grassy landscape with tall willows that come up to head level and a lot of little birch shrubs, a lot of mosquitoes.” Mosquitoes– they’re the bane of field workers in Alaska.

Keeney performs zooarchaeology, the study of faunal remains: remains left behind when an animal dies, and lithic analysis, the study of stone tools and other chipped stone artifacts. He uncovered an abundance of well-preserved animal remains and stone tools at the Matcharak Peninsula site. The artifacts are part of the Northern Archaic tradition. The Northern Archaic tradition and other ‘Traditions’ in Arctic archaeology help describe technological variability in Alaska during the Holocene– a groups of people spread across what is now Alaska and the Americas, they created different tools and used different subsistence strategies to hunt and live in the challenging and changing times.

The site was initially identified when NPS archaeologists performing a simple “shovel test” removed a caribou stragalus (ankle bone) from a simple 30 centimeter hole dug into the terrace. “It came back to Fairbanks and then was sampled for radio carbon dating and then the date was about 5500 years old.” Keeney and colleagues Andrew Tremayne and Tim Williams revisited the site later to expand the test, finding more items of interest in 2010 and 2011. “I took this over for my masters thesis in 2013 and we went out that summer and spent about 20 days out there in 2013 and we shifted the place we were excavating to within the permafrost [layer] and we started finding these tools that could tell us more.”

The archaeologists reached the site, located on a peninsula of Lake Matcharak along the Upper Noatak River in Gates of the Arctic National Preserve, using a float plane. They mapped an area and gridded it off with string, then slowly and carefully excavated bones and bone pieces, stone artifacts and the flakes of stones left over when stone tools are made.

During excavation, Keeney and colleagues also spotted wildlife. “A lot of migratory birds are coming in in the summertime so, we’d see loons a lot and every now and then swans. On our last day when we were getting ready to leave we had some curious wolves come in and check out the site after we had filled everything back in. They came and checked us out for a little while. Bears are out there. We see caribou. I think we have seen moose out there as well.“

It’s a remote spot, but in prehistory it would occassionally come to life when hunter-gatherer groups occupied the area for short periods of time over the years. “Everything so far suggests that people didn’t spend a whole lot of time here.” Keeney speculated the prehistoric occupants probably used the spot as a temporary camp. “They could go out and hunt, then bring [a kill] back, process it just enough to go back to their camp where there families and everyone was.” Alternately, “Maybe just a short term camp while they were in transit from one place to another in these off seasons.”

Permafrost is ground that has remained frozen for a minimum of two years. It’s composed of long-dead compressed organic matter: mostly tundra plants which froze during the winter instead of decomposing (and the occasional remains of animals) interspersed with frozen wedges of ice. Most permafrost occurs north of the Arctic Circle. Permafrost near the Arctic Circle close to a research base named Toolik Field Station generally measures temperatures of -5 to -2°C [23 to 28°F] and a thickness of about 200 meters [656 feet]. Further north on the Alaskan Arctic Plain, permafrost reaches temperatures as cold as -11 to -9°C [12 to 16°F] and thicknesses up to 650 meters [2,132 feet].

Every year plants grow on the active layer, the upper 30 to 100 centimeters [12 to 39 inches] of Arctic soil which thaws during the warm season but freezes during the long winter. Beneath the active layer, permafrost is a barrier so dense and cold that water from snow melt or rain cannot trickle through. Instead water moves via water tracks or atop the soil via small streams and lakes. That makes the Arctic tundra, which receives very little water overall, a habitat capable of supporting highly water-dependent plants during the growing season. Permafrost provides the infrastructure of Arctic ground, and provides a stable base for its ecosystem.

The tools excavated from the Matcharak Peninsula site are part of “…The Northern Archaic tradition as it has been called. It represents the mid Holocene, where people were adapting to changes.” Slow post-ice-age warming had melted glaciers and ice sheets and opened regions to growth. Arctic hunter-gatherers lived a subsistence lifestyle and hunted near Lake Matcharak. “It’s definitely interesting to find things that are this well preserved, so looking at the types of bone and the parts that are left behind, that can help us within theoretically models, how people were using these elements,” Keeney said.

Keeney explained “There does appear to be a change that happens 6,000 or 7,000 years ago. And some of this technology found at the Matcharak Peninsula site is represented of that type of technology or culture.” The tools found at the Matcharak Peninsula site are representative of the Northern Archaic tradition. They were created during the Mid-Holocene, when people were adapting to major ecological changes. “The landscape was changing, the forest was moving forward and you have increased paludification happening throughout Alaska. You are getting a change in the landscape, a change in the animals, and what animals are present in certain areas.”

Paludification is the process of bog formation. Water cycles change and the water table rises. Plant growth (biomass production) booms while the rate of decomposition remains low, resulting in the accumulation of partially decayed vegetation or organic matter called peat. In parts of Alaska, the landscape changed from boreal zones with black spruce to tussock shrub peatlands. 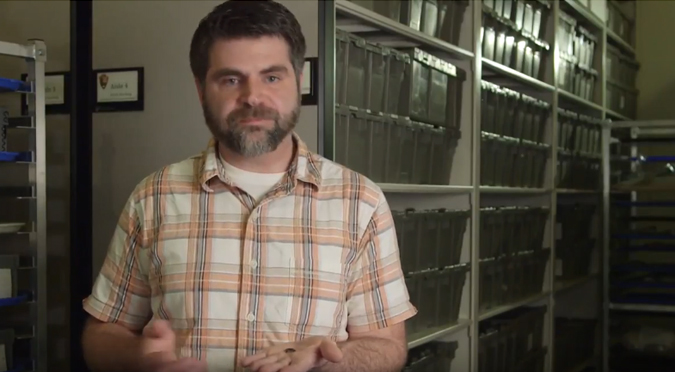 “This term paludification has to do with the increased creation of peat,” Keeney stated. “It is associated with these environments that are boggier, wetter– which Andy argued is the reason there is such good preservation at sites like the Matcharak Lake site.” Organic plant remains forming and blanketing the prehistoric hunting camp site kept bones and tools in wonderful condition. The boggy setting promoted anaerobic conditions with extremely low oxygen, which helps prevent decay. “Another thing that is probably key to preserving these organic remains is the permafrost. Just having it permanently frozen.” Score one for the Arctic freezer.

Permafrost can benefit archaeological sites by assisting in preservation Keeney said there’s a flipside: “It can be detrimental for the archaeologist because first of all, you have problems with permafrost in the active layer of it, where you will get churning. The word is cryoturbation [(frost churning)] where just because of the freezing and thawing of this active layer of permafrost, it causes things to get moved around.” Keeney: “You end up with some distortion of the archaeological record.“

He said that an experienced archaeologist on a good day could dig through 50-60 centimeters of soil, using tools to lift dirt, mapping artifacts and using a metal screen to shift through the removed dirt in case anything was missed. That’s not true in permafrost soil. “To dig through it is a daunting task,” Keeney said. “With permafrost you are at the mercy of the ice. You can only usually –on a good hot arctic summer day– can go down 5 centimeters, once we hit that permafrost. It required some adaptation and some strategizing on how to most efficiently expose everything in order to get the best thaw that we could and carefully remove it.”