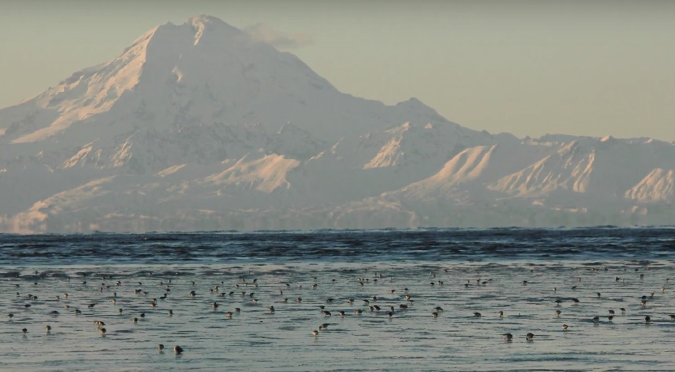 Conditions at the northern end of the Rock Sandpiper’s range in upper Cook Inlet, Alaska, latitude 61°N, are the coldest experienced by any shorebird species. The Pribilof Rock Sandpiper survives there all winter long.

“Rock Sandpipers, as far as shorebirds go, are fairly nondescript. They are about the size of a robin, they weight 80 grams, they fit nicely in your hand,” described Dan Ruthrauff, wildlife biologist with USGS Alaska Science Center. “I’ve been studying shorebirds here in Alaska coming up on 20 years now. Currently research is focusing on how shorebirds are responding to changes in the climate.”

Ruthrauff has studied the traits which allow Pribilof Rock Sandpipers to survive winter near Anchorage, Alaska while other shorebirds move south for the winter. “We thought that there must be something really remarkable about these birds, there must be something really unusual and novel about these birds, because otherwise there would be a lot of other shorebirds here.” USGS Alaska Science Center reported: “How birds cope with quickly freezing foraging substrates, loss of foraging habitat due to seasonal accretion of sea ice, and actual accumulation of ice on their plumage and body during extreme cold weather are questions being addressed through our research.” 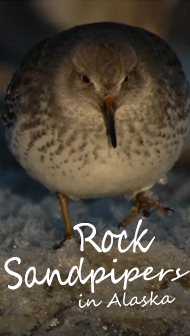 Ruthrauff told Frontier Scientists the birds spend the winter “Following this water/mud interface … getting covered in 5 degree mud and water.” He said “It’s really pretty remarkable. I’ve spent time out at the Kasilof River when it is 5 degrees, and you can see the mudflat flash freezing as the tide drops. And the birds can’t probe through frozen ground– so any mudflat that’s exposed for too long– they can’t penetrate it with their bill.” As the tide pulls away it drags sea ice blocks over the mudflats, scraping along. The ice scour tracks bare mud where Rock Sandpipers can forage for the tiny clams they survive on over the winter: the Baltic macoma (Macoma balthica). While macoma clams can be found at high latitudes around the world, Cook Inlet macoma are especially plentiful and have thinner shells with more flesh inside. Ruthrauff: “The macoma here are really incredible quality and that’s what ultimately lets these birds spend the winter here.”

At times when they can’t forage, Pribilof Rock Sandpipers’ winter plumage, featuring lots of frosty white feathers, serves well as camouflage as they roost on sea ice. Ruthrauff has experience counting the birds for population surveys. “When you see them on the ground they are invariably all fluffed up and they look incredibly fat, they literally become spherical; that is largely a behaviorally adaptation, they are minimizing their surface area to volume ratio.” They need to stay warm. Average January temperatures in upper Cook Inlet, Alaska measure -9.4°C [15°F]. “There’s a period at high tide when the birds can’t access their food and they are forced to roost and when they are sitting there not moving huddled trying to conserve their heat that’s when all this kind of flash-freezing water was hitting them,” Ruthrauff related. Yet the birds survive ice freezing on their bodies.

There’s more going on underneath the feathers. “Within that little tennis ball is a lot of fat.” After holding a breeding season average weight of 70 grams, Pribilof Rock Sandpipers change to a winter season average weight of about 110 grams “They put on 40% more body mass and it’s almost all fat.” Pribilof Rock Sandpipers increase their fat stores to nearly 20% of of their total body mass over the winter. The fat provides insulation as well as emergency energy, letting the birds fast for days at a time when food is unavailable. “When they hit one of those nasty cold snaps and they can’t access the mudflats because the mudflats are frozen, they can burn that fat as an energy reserve and it helps them get over the hump until the next warm spell when the mud flats open up again and they can forage,” Ruthrauff said.

Rock Sandpipers have a high amount of phenotypic plasticity or flexibility. They can alter their body composition and behavioral trends in response to environmental conditions, to changing habitats and to changing seasons. The birds morph their bodies, buffing traits they need over the winter time to produce heat and to digest food.

“Shorebirds generate heat by shivering; they enlarge their breast muscles and they shiver,” Ruthrauff said. During winter Pribilof Rock Sandpipers have more muscle mass in their pectoralis and supracoracoideus muscles (muscles which lower and raise the wings during flight) to help them shiver efficiently. Thermogeneis is the production of heat, and shivering with these strong muscles helps produce heat that is then trapped by the birds’ fat and by their fluffed up feathers. 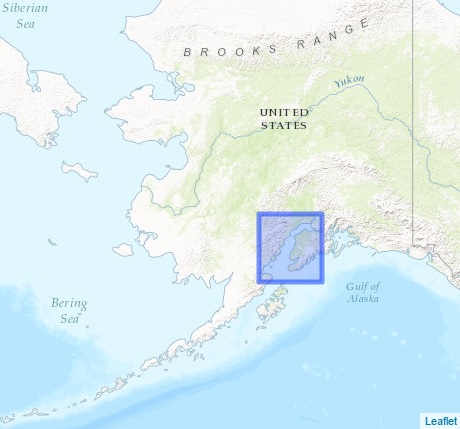 “They increase the size of their liver so that they can digest food more quickly,” Ruthrauff said. Liver and kidney tissues help digestive processes. Before digestion, birds use the muscular gizzard in their throat to crush their food. “In the breeding season they feed on small invertebrates, mosquitoes, crane flies, small bees and flies. Those are easy to crush. But in the winter,” the Pribilof Rock Sandpipers eat tiny quarter-inch macoma clams. “We’ve done surveys out there where we find 3,000 clams per square meter. So these are teeny, tiny little clams and they are everywhere. And these birds have the ability to detect the clams with pressure sensitive pores on the tips of their bills.” How cool. “They can find as many clams as they can possibly swallow, but they have to take a digestive pause for their gizzard to actually crush these shells,” Ruthrauff said. “That, for these birds, is their digestive bottleneck. The act of physically crushing their prey.” Once crushed, the clams pass into the intestines where the birds’ bodies can actually extract the flesh from the shells.

Rock Sandpipers (Calidris ptilocnemis) have 4 sub-species with (very slightly) different plumage and geographic ranges. Pribilof Rock Sandpipers (C. p. ptilocnemis) breed in the Pribilof islands, 4 small islands in the Bering Sea, then travel east and actually a little north to overwinter in upper Cook Inlet. “It is really unusual for a shorebird to actually move to a higher latitude in the nonbreeding season like the Rock Sandpiper does here in Cook Inlet,” Ruthrauff highlighted. Ruthrauff has compared the traits of Pribilof Rock Sandpipers to those of another Rock Sandpiper subspecies, Northern Rock Sandpipers (C. p. tschuktschorum), which don’t stay in Alaska for the winter but instead migrate south to California, Washington, Oregon and British Colombia. The sub-species are genetically so similar that they could interbreed. Northern Rock Sandpipers breed on Russia’s Chuckchi (or Chukotski) peninsula and in western Alaska then migrate south like most shorebirds. “We did some comparisons during the course of my research comparing the birds in Cook Inlet with the Rock Sandpiper species that has the sense enough to migrate out of Alaska for the winter,” Ruthrauff said. “We had individuals of each sub-species and we did lots of detailed analysis to compare their metabolic rates; we looked at how they allocate fat and lean tissues.

Pribilof Rock Sandpipers found a fantastic food source in wintertime Alaska, and change themselves to best utilize it while other Rock Sandpiper sub-species use a different approach. “The birds in Cook Inlet were … doing things differently but it wasn’t something that the other sub-species couldn’t do, it’s just that the sub-species chose not to do it.”

Why don’t Pribilof Rock Sandpipers travel somewhere where they’ll have an easier time? Most shorebirds escape very cold temperatures by migrating. “The deeper you dig, you think you’re going to find more answers but in fact you’re going to come up with more questions.” Ruthrauff said “Rock Sandpipers for some reason have found that they have a really good setup here in Cook Inlet, there’s tons of food but they have to work really hard to get it.” He characterized the birds: “They are just tough little birds and they make it work out there. ”