“Up until the point that the Matcharak Peninsula Site was found, you could essentially fit all the identifiable materials from these Northern Archaic sites into a shoebox,” archaeologist Joe Keeney said. The Matcharak Peninsula site is “A very unique site that has such good preservation, and such high numbers” of bones. The site’s details shed light on the people who inhabited what is now Alaska during prehistory.

Keeney and other archaeologists have discovered “An abundance of well-preserved animal remains” as well as stone tools associated with Northern Archaic technology at the Matcharak Peninsula site. Shallow permafrost and the ongoing formation of peat helped keep the animal remains preserved. The site is significant because it holds the largest collection of well-preserved animal remains from the Northern Archaic time period– a cultural tradition marked by distinctive tools crafted by people during the Mid-Holocene when major ecological changes were enforced by slow post-ice-age temperature warming.

What was the camp for? “All signs so far suggest that it was used for short term occupations over and over again,” Keeney said. “I think that the main focus there was caribou hunting, perhaps as a base camp for going to hunt sheep up in the mountains.”

The Matcharak Peninsula site “Represents a short term camp or a short term hunting area where they, maybe, butchered the animals and prepared them to take back to their camp.” Keeney explained that excavations revealed “It seems that, by far, caribou is dominant.” Among the bones found at the site “There’s evidence of a few individuals of sheep,” specifically Dahl Sheep. There are other animal remains. Fish: lake trout, burbot, whitefish, pike. Bird: ptarmigan, grouse, duck. Arctic ground squirrel bones. “These other animals weren’t the reason these people were there, specifically, because they are occurring in such small quantities,” Keeney said. They might have served as supplemental food, or– in the case of Arctic ground squirrel– perhaps because the animals dug burrows there.

Bone remains coupled with stone tools help archaeologists reconstruct the behavior of the ancient people who used the site. They answer questions about the diets, hunting strategies, and seasonal movements of people who were potentially the ancestors of modern Natives in Alaska, Canada, and Greenland. They also give us glimpses of life during the Mid-Holocene’s shifting climate conditions. 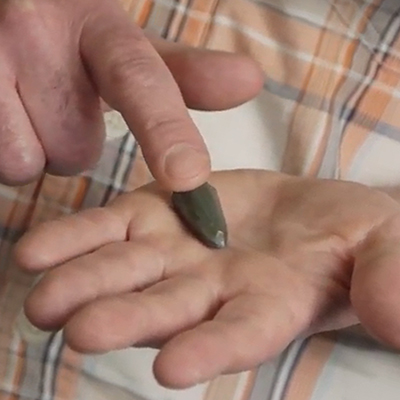 Keeney pointed out an artifact, one of two of the same sort discovered at the Matcharak Peninsula site. “This is the base to a side notched point; its actual function may have been for a spear, or an atlatl dart or– some people suggest– possibly arrows even.” Side notched points are “One of the key things that are different that happened in the Mid-Holocene, and these start popping up 7,000 years ago throughout Alaska. The people started making points like this,” Keeney said. Uncovering that kind of artifact helped the archaeologists diagnose their site as belonging to the Northern Archaic technology tradition.

The side notched points are made of obsidian, and using an x-ray gun called an XRF allowed Keeney to analyze trace elements in the material and trace it back to its source: “This came from Botsatana which is an obsidian source off the Koyukuk River, just south of the Arctic Circle.” Another variety of artifacts discovered at the Matcharak Peninsula site are microblades. They’re made of grey chert, which can be found in the Northern Foothills of the Brooks Range.

Keeney is impressed by the handcrafted tools. “One thing that always gets me: a lot of people want to talk about the ‘primitive people’ from 7,000 years ago and 10,000 years ago,” he said. “To make something like this would have been commonplace for them. I couldn’t make something like this. Not without a lot of practice and instructions. So people knew what they were doing back then.”

“Throughout the archaeological record, microblades were occurring in the late Pleistocene in Alaska, and they occur in sites up to a couple of thousand years ago. This is another feature that is found in these Northern Archaic sites.” Keeney said “This can help up understand what was potentially happening at this site and try to understand how technology was organized… Not just at this site but perhaps at other sites in Alaska, or at least in the Brooks Range.”

Evidence of hunting activities tells the archaeologists more about the lives of the people who used the site. Animal “Parts that are more valuable because they have more meat or fat contained within the bone or the bone marrow,” Keeney explained, “Would probably be taken home with you, back to your camp,” while less valuable parts might be left behind. “This can help us understand site function.” Examining what types of bones were left at the camp paints a picture of what animal parts were most prized and how people used the parts. The site may have been a butchery site, a temporary campsite which served as a stopover.

Bones smashed with tools also point to ways people survived the year. “Were people bashing these specific bones potentially to render grease from them?” Keeney said “Grease, especially in a place like the Brooks range, was an important source of fat during lean periods in the winter especially and also the summer when you don’t have large numbers of caribou running around.”