“This is when shorebirds are supposed to be in Mexico and Panama.” Dan Ruthrauff, wildlife biologist with USGS Alaska Science Center, researches Pribilof Rock Sandpipers (C. p. ptilocnemis). These amazing birds are unique; unlike other migratory shorebirds in the North Pacific they do not fly south for the winter. Instead they overwinter at high latitudes in the ice and cold of upper Cook Inlet near Anchorage, Alaska. The USGS Newsroom reported: upper Cook Inlet is the world’s coldest site that regularly supports wintering shorebirds.

Ruthrauff: “We came to learn that there were in fact some shorebirds, namely Rock Sandpipers, that were spending the winter at very high latitudes. It was right under our noses, it was right out the front door here in Anchorage and upper Cook Inlet but it might have been a million miles away even though it is right outside our front door. We just never knew they were there because we assumed that they couldn’t be there– that it was too cold. But some very fortuitous events led us to find out that there were birds there. And we started to explore their distribution and abundance through the whole winter period.”

Fish & Game employee David Erickson first spotted “A few thousand small shorebirds,” in February in Cook Inlet during an aerial survey that was part of the Outer Continental Shelf Environmental Assessment Program (OCSEAP). Ruthrauff explained OCSEAP as an effort “To figure out the baseline biological resources before a lot of oil development started. As part of that there was an effort to document distribution and abundance of winter birds in Cook Inlet.” The Outer Continental Shelf (OCS) Lands Act requires the Department of the Interior (DOI) ensure development and production activities, like oil and gas development, do not irreparably damage marine and coastal environments, and the Outer Continental Shelf Environmental Assessment Program (OCSEAP) was a part of that effort. (http://www.arlis.org/resources/special-collections/ocseap-reports/) 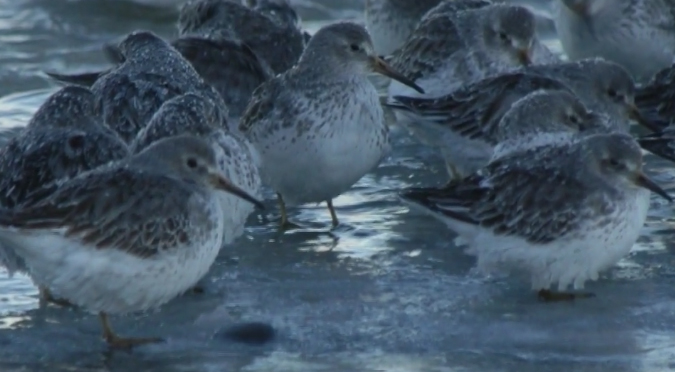 Ruthrauff said “David Erickson was flying surveys not expecting to see shorebirds but he happened to fly over a mud flat in Tuxedni Bay, which is an estuary on the West side of Cook Inlet, and he saw a large flock of shorebirds in February.”

Learning of Erickson’s report prompted USGS Alaska Science Center wildlife biologist Robert E. Gill Jr. to investigate, pushing for winter surveys of upper Cook Inlet “To see what was the seasonal abundance of shorebirds in Cook Inlet was, and much to his surprise he found Rock Sandpipers here throughout the winter in very large numbers. So, it was Bob really following up on a hunch of a pretty random survey,” said Ruthrauff. Gill also collected other reported sightings of the birds, including mention from a pilot forced to fly low over the inlet due to inclement weather, and reports from participants in the National Audubon Society’s Christmas Bird Counts. This was no one-off occurrence; it was common for Pribilof Rock Sandpipers to linger in Alaska.

Why would the birds choose to spend the winter in Cook Inlet? Other sandpipers migrate further south successfully, but the Pribilof Rock Sandpipers linger in the harsh and icy inlet. They fly in during late October and early November, and don’t return to their breeding grounds in the Pribilof Islands until March/April. The Pribilof Islands west of Alaska are part of the the Alaska Maritime National Wildlife Refuge. The species’ favorite overwintering grounds in upper Cook Inlet are Susitna Flats and Trading Bay, where they forage for tiny clams– the small bivalve Macoma balthica– on muddy tidal flats.

The area is special. While freezing temperatures quickly form ice on most tidal flats, these flats are exposed over and over again. Powerful local currents along the shore in this portion of Cook Inlet grab and sweep away grounded ice. As the ice moves with the tides it scrapes the mud below, leaving ice scour tracks. Clams in the scraped areas are more accessible to foraging sandpipers… they might even be exposed and damaged by scraping ice and cold air temperatures. The Rock Sandpipers seeking those clams also face freezing temperatures and even end up bearing periods when ice forms on feet and feathers, but the rich food source coupled with their ability to adjust body traits between the seasons gives them a strong fighting chance to gather enough energy that they can survive Alaska’s rough winter weather.

Alaska’s largest human population center, Anchorage, is right there. And the oil and natural gas production facilities in the Cook Inlet area are second only to those occurring on Alaska’s North Slope. Those factors vastly increase the likelihood of negative impacts to vital habitat and shorebirds living in Cook Inlet, both overwintering Rock Sandpipers and the many migrant species which stop there every year. The birds might face direct disturbance, contamination from pollutants, and serious damage to or contamination of their food source and habitat. The report ‘Seasonal Shorebird Use of Intertidal Habitats in Cook Inlet, Alaska’ prepared by U.S. Geological Survey wildlife biologists Robert E. Gill, Jr., and T. Lee Tibbits, (of the Biological Resources Division Alaska Biological Science Center in support of Mineral Management Service Alaska OCS Region) investigated. It reported: “Our results clearly show Cook Inlet to be extremely important to both migrant and winter resident shorebirds, supporting major portions of the population of one of North America’s most (Western Sandpiper) and least (Rock Sandpiper) abundant species… That shorebird use of this magnitude and importance occurs on one of the most active gas and oil exploration and development areas of the continent should be of major concern to conservation planners.”

As a breeding ground or vital stopover point for myriad migrant birds needing high energy for long flights and producing and raising young, and as a winter haven for Rock Sandpipers, Cook Inlet is worth safeguarding. The report added: “For Rock Sandpipers, in particular, an oil spill in winter could have severe consequences. Not only is winter the period when birds are faced with high metabolic demands (Summers et al. 1998), but it is also the time when weather-induced accidents are most likely to occur and with little chance of rapid clean-up (MMS 1996). This combination of factors would make Rock Sandpipers highly vulnerable, both from direct oiling and indirectly through loss or reduction of their food supply.”