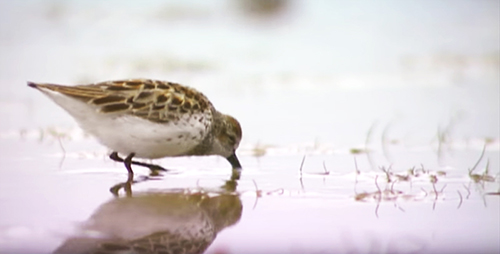 “Alaska is home to many many millions of breeding shorebirds during the summertime.” Dan Ruthrauff, wildlife biologist with USGS, Alaska Science Center, said “They are all Alaska’s birds but they are shared with the world.”

Without a map, a migratory bird makes do. “These birds find their way to the same exact little patch of tundra every year and make the same stop in Kachamak Bay every spring en route to the Yukon Delta,” Ruthrauff said. Sharp-billed sandpiper juveniles are born in Russia then come to Western Alaska to feed without any guidance from their parents. “The adults never pass through Alaska. It’s only the juveniles.” Ruthrauff marveled that they make it to Alaska. “They don’t know where they are going,” he said, “They are 2 months old and they fly to their non-breeding sites through the Austral-Asia Flyway, having never been there before.” How? It might be that “They have some pre-programed genetic map in their head that says: ‘I’m going to Australia, I’ve never been there, there’s no adults to show me, but here I go.’ And they do it! it’s pretty amazing.” 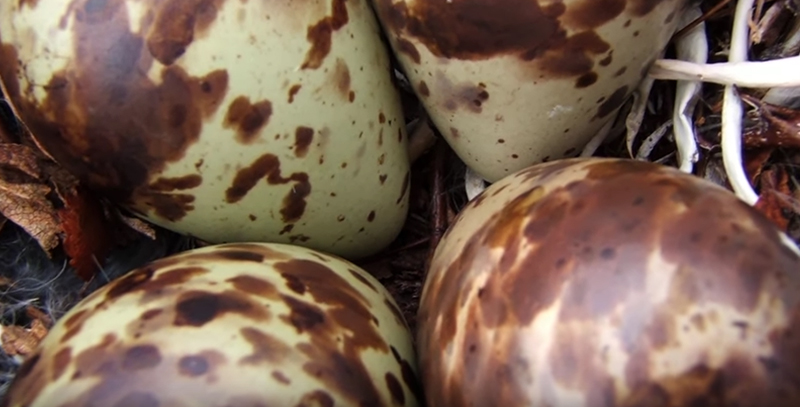 Shorebird eggs have to contain a high calorie count to help the developing chick grow big and strong, meaning the mother shorebird has to find a lot of food before laying her eggs so the eggs can be nutrient-rich. Then, each parent trades off sitting 12-hour shifts on the eggs. They can warm the clutch of eggs particularly efficiently due to the egg’s configuration: 4 eggs sit close, ‘pointier’ sides aimed at the center of the nest.

Shorebird chicks are precocial, and able to leave the nest and feed themselves just hours after they hatch. Since they aren’t helpless in the nest while their eyes open and their feathers grow, like altricial chicks, precocial chicks are less vulnerable to predators. By the time 15 or 16 days have passed the chicks can already fly short distances.

“Shorebird migration really captures people imaginations; so when you go to the beach in Homer in early May and you see thousands of western sandpipers it’s really kind of interesting to know that those birds came up from Panama and Ecuador, and Peru and Mexico and California, and they are relying on a series on interconnected wetlands to get here to Alaska to where they breed.”

We asked Ruthrauff ‘Are you concerned for the Rock sandpiper because of climate change?’

He answered “It’s a tricky question. In a lot of ways as a shorebird researcher, I think birds that spend their entire annual cycle in Alaska are probably in better shape that those which leave Alaska, with respect to climate change, in that we have relatively pristine habitats here and relatively small human footprint. There’s plenty of habitat.” Score one for today’s beautiful Alaska. “With climate change, that habitat will probably change. We’ve already seen evidence that the habitat is changing. And whether or not the birds will be troubled by that, it’s hard to say.”

Across the world there are different stories. And our resource use in Alaska and the U.S. does create world impacts. “I do worry a lot about the shorebirds that leave Alaska, which is the vast majority of shorebirds that breed in Alaska,” Ruthruaff outlined.

“At coastal sites around the world where they spend their winter, there is not a lot of room, for instance, for sea levels to rise,” he said, and “Sea levels will rise.” Sea walls, dikes, and embankments that protect human property also prevent the mudflats and wetlands which support so many migratory birds from slowly shifting range to account for rising sea levels. “The mudflat can not go further inland. I’s going to hit a sea wall and those birds, they are just out of habitat.” Sea level rise and shifting ranges for plants and animals mean that shorebird habitat will be threatened both by the elements and by invasive species like mangroves, which take over wetlands, mudflats and beaches.

For shorebirds, “Climate change does not bode well in other parts of the world,” Ruthruaff stated. “There are a lot of really important sites around the world that shorebirds rely on and they are going to be ever more important. It’s going to be incumbent upon us to make sure that those sites remain as natural as possible.”

Look: the Grizzly Pop-Up Card! We are excited that artist Susan Joy Share has designed the bear pop-up art for our 5.5” x 8.5” card promoting bear research in Alaska. Share makes trailblazing art combining fold-out structures, bookbinding, painting, sewing, collage, interactive and performance art. Find the card, as well as DVDs about science and wildlife in Alaska, at our Shop.