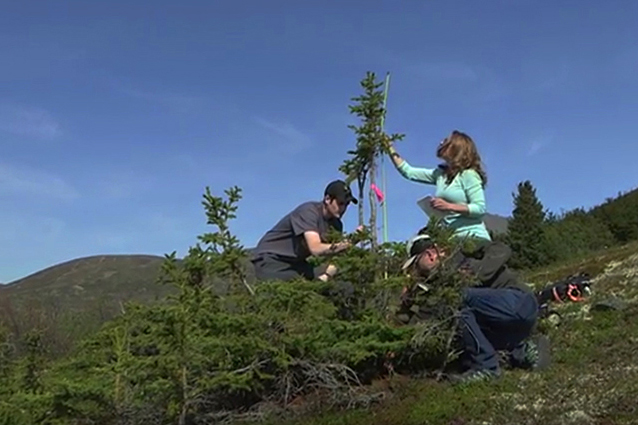 “There are many many factors there. And we can only make rational policy decisions if we know how the system works.”

Bjartmar Sveinbjornsson is a professor of biological sciences and the director of the Environment and Natural Resources Institute at the University of Alaska Anchorage. He’s hosted two student as part of the National Science Foundation’s program Research Experience for Undergraduates “Every year for the last decade or so,” including 2015 REU participants Amanda Bonavia and Benjamin Russell, students from Rockford University, Chicago, Illinois

The Chugach mountains of South Central Alaska contain both boreal forest and coastal rainforest. “This is a good place to study moments of biomes under changing environmental conditions such as global environmental change,” Sveinbjornsson said. He directed Bonavia and Russell in researching the growth of white spruce trees growing in the Chugach mountains. Sveinbjornsson’s work also takes him further north to the Brooks Range of Alaska, where boreal forest meets tussock tundra.

“Why are we interested in treeline and biome change? The reason is different vegetation types affect climate in different ways,” Sveinbjornsson illuminated. The boreal forest, in which evergreens bear needles through winter, creates a dark-colored cover on earth’s surface. While white snow and tundra plants’ light tones reflect solar radiation (and thus heat) away, the forest’s dark colors absorb more radiation, which contributes to climate warming. Yet, trees utilize atmospheric carbon dioxide (CO2) during photosynthesis then store carbon (C) in their physical structure. Through large-scale photosynthesis, forests can take in more carbon from the atmosphere in one year than tiny tundra plants can.

Forests can both contribute to and detract from climate warming.

Some scientific models– computer-driven simulations– have suggested that as temperatures in Alaska rise the edge of the boreal forest is going to move North and up, overtaking tundra and reaching higher on mountain flanks. Sveinbjornsson told us that how fast and whether it happens depends on many factors. “My recent research is focused mostly on treelines and what is limiting the spread of trees up the mountains or from South to North or so on. And in order to answer these questions we need to know how trees work,” Sveinbjornsson said.

“We need a mechanistic understanding of what is controlling the activities in these ecosystems.” Sveinbjornsson, Bonavia and Russell worked to define the specifics of how Chugach Mountains trees are growing at the treeline. Sveinbjornsson: “Typically you have a forest which means that there is a certain density of trees, of certain size. Then you come up to where there is a sharp edge, below which there is a high density and above which the trees are scattered and very few.” Why do trees grow so small at and above the treeline? “My research is as much focused on the environment as it is on the trees themselves,” Sveinbjornsson said. To understand how trees work, scientists need to understand the environment and what environmental factors trees have to face, overcome or tolerate in order to flourish.

“The onset of the growth season is determined by temperature,” Sveinbjornsson said. Every year, Chugach trees start growing when temperatures warm up. Tree needles will grow until the end of the first week in July. “The end of season is determined by a combination of photo period and temperatures,” Sveinbjornsson said; photo period is the length of time that daylight reaches the tree, governed by the tilt of the planet.

Warm air accumulates in the forest due to both dark-colored needles absorbing solar heat and reduced wind movement caused by trees standing close together. In contrast, trees scattered above the treeline face the colder temperatures and harsher winds you might expect standing alone up an Alaskan slope. Usually the growth of trees sheltered in the warm forest is sparked earlier than trees’ above the treeline, which means forest trees have more time to grow needles and branches. “If on the other hand you have a sudden warming, very sudden and it’s quite warm, like we had the last two summers here, then they all start at about the same time and the difference is very small.”

Treeline trees often suffer reduced growth because they’re more likely to to lose needles during the winter. Fierce winds and ice crystals from wind-born snow blowing fast along the ground batter the trees. Every needle lost is a blow to the tree since needles store food all year and, during the summer, perform photosynthesis. Sveinbjornsson elucidated: “When they start growing in the Spring they don’t have new photosynthetic needles. They have to rely on the photosynthesis of the needles that survived and the storage in these needles, because most of the sugar or carbohydrate storage in the plant is in the needles.” Needles store carbohydrates, starches and sugars. “Those sugars are used for the extension growth of the branch, and if they have lost a lot of needles, they have lost surface area for photosynthesis and they have lost their storage.” 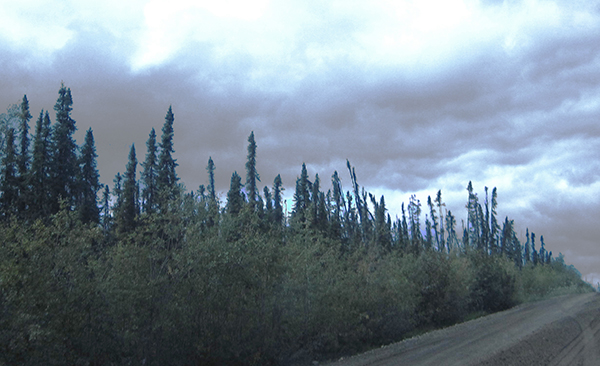 The science shows big spruce trees growing healthy in the forest are genetically the same as their stunted fellows growing above the treeline; it’s environmental factors like these which make the difference. “We are looking at individuals and why they grow so slowly. We look at the growth itself, we see when it starts and we try to relate that to environmental factors,” Sveinbjornsson said of his team. They’ll measure rates of photosynthesis and respiration. They’ll note trends about how many needles survived the winter. “The number of needles is very important as well as the rate at which they take up CO2 or lose it.”

Sveinbjornsson: “When the blowing snow hits the branch it strips off the needles that are closest to the tip of the branch and those are the needles that synthesize most and have the most carbohydrates stored. So when the new shoot starts growing, it’s drawing carbohydrates from the needles next to it, and these are very few now because they have been lost. And so there is less carbon to draw and their needles are also few and they can only produce so much carbon to add to that, and so they basically are starved. And the extension shoot is less.” The year’s growth extends less, growing a shorter branch, on damaged trees.

“There are many many factors there. And we can only make rational policy decisions if we know how the system works,” Sveinbbjornsson said. Recording the gritty details of how boreal forest trees grow grants a clearer understanding of how the forest acts, and how it will respond to and influence changing environmental conditions.