April 28 2015— The ice of Alaska’s waterways breaks up violently with spring thaw. A rush of brown dark water forges downstream. The color stain shows the presence of decaying plant and soil matter dissolved in the water called organic carbon.

When it interacts with bacteria or sunlight, dissolved organic carbon can be converted into carbon dioxide gas. 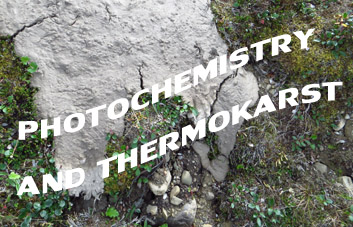 In three new videos Photodegradation, Thaw Happens, and Sunlight, Carbon, Then CO2 FrontierScientists features scientists working to decode how much and how swiftly Arctic carbon is being transformed into carbon dioxide gas under modern day conditions. Join Dr. Rose Cory, professor of aquatic geochemistry at the University of Michigan, as well as Dr. Collin Ward, postdoctoral fellow in the Department of Earth and Environmental Sciences at U-Michigan, and Jason Dobkowski, lab manager for Dr. George W. Kling in the Department of Ecology and Evolutionary Biology at U-Michigan.

Warming trends in the Arctic prompt permafrost thaw. Some of the deeply layered soils that once remained frozen year-round are warming up, allowing organic carbon frozen and locked away for perhaps thousands of years to reenter the global carbon cycle. Permafrost is estimated to contain 1,600 billion tons of carbon, more than twice as much as the carbon currently aloft in Earth’s atmosphere. Since carbon dioxide is a greenhouse gas which promotes climate change, understanding Arctic permafrost carbon’s transformation is an important part of understanding future climate change.

Sunlight also causes carbon dioxide gas to emerge from water holding dissolved organic carbon. Dissolved organic carbon is a group of molecules, which are atoms held together by chemical bonds. Absorbing sunlight, especially ultraviolet light, can introduce enough energy to the molecules that those chemical bonds are broken or reorganized. This is called a photochemical reaction.

In most parts of the world, bacterial activity accounts for more carbon dioxide emerging from dissolved organic carbon than does sunlight. But in the Arctic much of the ground is frozen as permafrost and impassable to water; therefore, water generally must flow through wide and shallow channels, routes which expose the water to lots of summer sunlight.

In the Arctic, temperatures are warming twice as fast as the average rise in temperature for the rest of the earth. That amplified warming is thawing permafrost, releasing previously frozen carbon. Although the Arctic is very cold and dark during winter, summers in the land of the midnight sun expose organic carbon to long periods of sunlight. That sunlight’s interaction with dissolved organic carbon can have worldwide impact as it releases carbon dioxide gas. These scientists’ research is designed to measure how and how fast carbon in permafrost soil is changing into carbon dioxide.

“We want to let travelers, teachers, students, aspiring scientists, and anyone else interested in science feel as if they are with scientists as they track grizzlies or take the temperature of permafrost in a borehole,” explains Liz O’Connell, video director for Frontier Scientists.