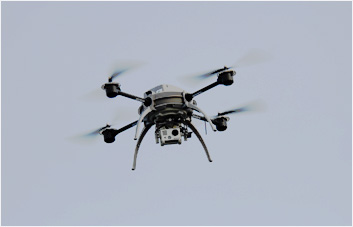 “So our job is to get it out there, get exposure to the technology, get people to understand it’s benefits and its limitations. And see how it can solve their problems.” said Greg Walker, Unmanned Aircraft Program Manager at the University of Alaska Fairbanks.

Impressively the Aeryon Scout has proven it’s got the “right stuff” to fly in the Aleutian Islands. Or is it the operators who have figured out how to make it work? You be the judge. Watch Fly Scout Fly, the first video about Walker’s testing of practical applications for unmanned aircraft vehicles (UAV’s) in Alaska. Keep in mind, the Aleutian islands are noted for their winds—25 knots is a normal wind speed, high seas—think over 10 foot sea waves like in the “Deadliest Catch”, and unpredictability—their vessel the Norseman waited 2 days in a cove as hurricanes blew through.

Fascinating video of current scientific discoveries in some of the Arctic’s most remote and dramatic landscapes are chronicled in short videos, Twitter feeds, blogs and web reports.

“We want to let travelers, teachers, students, aspiring scientists, and anyone else interested in science feel as if they are with scientists as they track grizzlies or take the temperature of permafrost in a borehole,” explained Liz O’Connell, video director for Frontier Scientists.