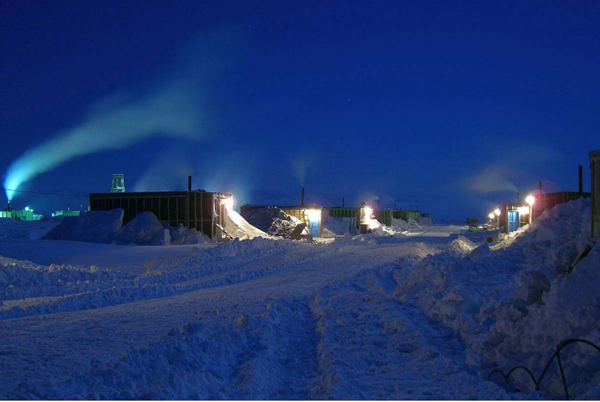 Deep under a frozen lake in Siberia, Russia, lies a researcher’s gold: an astounding record of past climates preserved in untouched layers of lake bed sediment. In 2009 an international team of scientists headed to Lake El’gygytgyn (pronounced El’geegitgin). They perched specialized drilling equipment atop the icy lake surface and drilled down. At the bottom of the lake as much as a quarter mile (1,312 feet) of sediment awaited them atop the site of a monster meteorite impact. That sediment, withdrawn in cores and shipped to labs in Germany for close scrutiny, represents a continuous record of past Arctic conditions going back 3.6 million years. The more complete picture of paleoclimate it forms will help scientists understand how and why Earth’s climate changed in the past, and give them better tools for predicting the future. 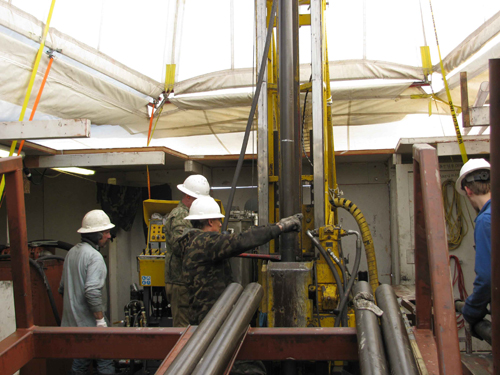 An international team of scientists from the United States, Russia, Germany and Austria undertook this geological drilling project as part of the International Continental Drilling Program. The U.S. research team was led by Julie Brigham-Grette of the University of Massachusetts-Amherst and included doctoral student Kenna Wilkie and PolarTREC teacher Tim Martin. The diverse team of scientists faced no easy task- six months of hard work in Northeast Siberia during winter. The team hired converted tanks to pull drilling platforms to the extremely remote lake (62 miles north of the Arctic Circle), chartered temperature-controlled cargo planes to safely move the sediment core samples back to specialized labs, and lived in temporary housing atop ice. It was all so they could collect excellent samples: the longest sediment core samples retrieved from the Arctic region. Their successful expedition showcased international scientific cooperation and provided one-of-a-kind data for the scientific community. The project was funded in part by the National Science Foundation: the NSF Division of Earth Sciences and also the NSF Office of Polar Programs. 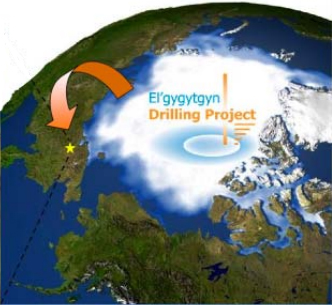 It is said that location is everything, and that is certainly true for Lake El’gygytgyn (El’geegitgin). The lake, 7.5 miles wide and 558 feet deep, rests in the middle of a large impact crater formed 3.6 million years ago when a meteor slammed into the Earth. The region in present-day Russia it struck was part of Beringia, the great land bridge which spanned the ocean between Asia and North America. The area was never glaciated. Accordingly, it wasn’t scoured or covered over by crawling ice. Ever since the meteorite struck, the basin where Lake El’gygytgyn rests has accumulated sediment: drifts of pollen, decomposing plant matter, ash from fires or volcanic activity, and other debris. With these samples, the scientists can measure radioactivity, magnetic and sonic properties, electrical resistance, and much more. Like vertical timelines, the striated sediment cores withdrawn from the lake-bed are capable of telling stories about the world. Lake El’gygytgyn is a gem, holding an undisturbed, continuous uninterrupted sediment sequence which has accumulated for the past 3.6 million years.

“Earth’s warm and cold cycles over the past one million years varied every 100,000 years at times. Before that, however, climate change, especially in high latitudes, varied over 41,000- and 23,000-year cycles. The record from Lake E will show the ramp up to that type of change in the Earth’s climate.” ~ Julie Brigham-Grette* 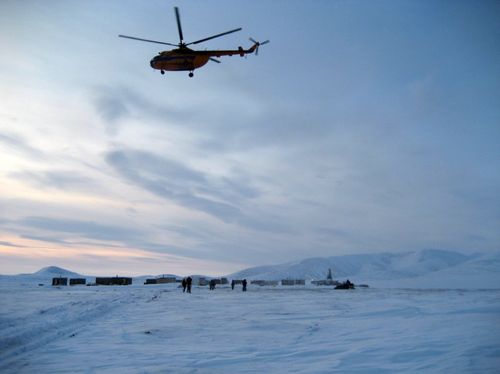 Today Siberia and the Arctic are notoriously cold. The meteorite struck during the warmer Pliocene era, when mammoths, giant ground sloths, and early hominins still roamed the earth. During the Pliocene the area supported a heavily forested ecosystem. Hopefully through research we can fully understand the causes of Arctic climate shift toward a cold permafrost ecosystem some 2 two 3 million years ago. What influences forced such a dramatic change? Understanding that, and comparing past Arctic climate change to paleoclimate records of change that occurred in the rest of the world, will help form more complete climate models. Sediment cores, marine sediment cores, and ice cores all contribute data to an increasingly complex climate map. Climate modeling can help us systematically analyze the past, and predict what will happen as the present-day global climate continues to shift.

Our ability to inform policy makers about global/regional climate and related environmental change and its uncertainties depends on our capacity to understand the role of the Arctic region in modulating past periods of change under different climate forcing conditions. ~ Julie Brigham-Grette**

While ice cores collected from the Greenland Ice Sheet are long enough to detail about 110,000 years, the sediment cores from Lake El’gygytgyn (El’geegitgin) map 30x more… nearly 3,600,000 years. The undivided core is nearly 1165 feet long (similar to the Empire State Building‘s top floor at 1250 feet). It is an unprecedented time-continuous terrestrial record of Arctic conditions. I31 feet of core is from the warm middle Pliocene era- when there was no permanent sea ice in the Arctic Ocean- which may represent an analog for the climate not-too-distant humans will face. 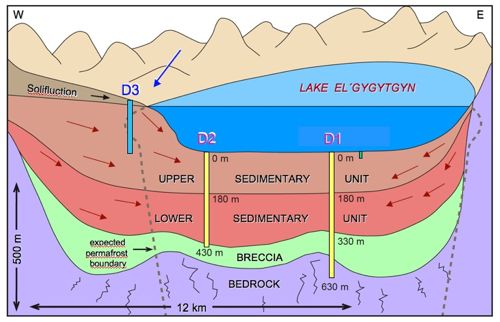 While most of the core samples were drilled from the lake bed, an additional borehole was cored at the western edge of Lake El’gygytgyn. The borehole was fitted with instruments to monitor ground temperatures and will continue to contribute to the Global Terrestrial Network for Permafrost.