Seattle, Washington– A sticky strip of fly paper lays along the floor at the door of a tiny room.  “Step over,” says Jeff Bradley, collections Manager in mammalogy at the Burke Museum in Seattle.  A group of visiting anthropologists and archaeologists step over the sticky strip and crowd together as Bradley opens a 2 X 5 foot metal container revealing his silent workers–bugs. 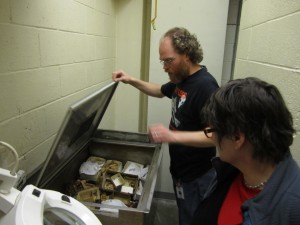 The first whiff emanating from the box hits the group. “Stinky,” says someone.  “Disgusting,” says someone else.  The bugs crawl over bones, hair, flesh, or cluster in groups.

The bugs, Dermestes masculatus, are busy. They are doing what they are brought in to do—to clean skeletons.  In this instance, they clean the skull of an Anoa or pygmy water buffalo.  “Once cleaned, the skull will join the approximately 50,000 specimens in our collection. The Anoa will be the first member of its genus  in our collection,” says Bradley. 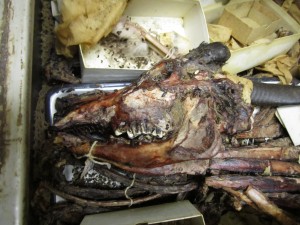 Though the bugs provide a great service in preparing the bones for exhibit, Bradley also is aware of the threat they pose to the museum. The tiny room with Dermestes masculatus is deliberately separate from the rest of the Burke museum collection. “The same bug, commonly referred to as a skin beetle, is a major potential pest in our collection either the ones from our colony or wild individuals getting into our building,”  says Bradley.  The Burke’s collections could be damaged if the bugs became an infestation feasting on the collections and displays. The sticky strips as well as traps inside each collection case assist his bug watch. 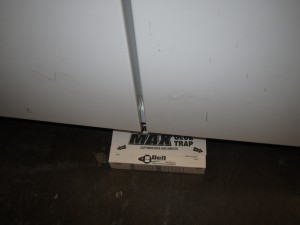