The word spread fast over the Oregon birding network.  On December 1, 2011, COBOL, Central Oregon Birding Online Listserve, began posting excited birders’ comments from those who traveled to Burns, a two hour trip from Central Oregon, to see the Snowy Owl.

“Looking at the Snowy Owl, Whoo hoo!”  Kathy Day relayed on site from her cell phone.

“What a thrill… and a lifer,” noted Tom Lawler. 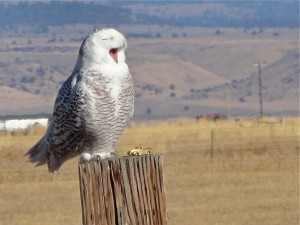 Truck?  Well who knows who put, or for what reason, a golden toy truck on the Snowy Owl’s post. Fortunately, the toy didn’t seem to faze the Owl, as we can see in the photos taken by Cindy Zalunardo, ECAS, East Cascades Audubon Society member, the owl nonchalantly maintains it’s post.

Burns, Oregon is not the only spot graced by the migrating Snowy Owl.  This map from eBird.org, shows all the locations of recently reported Snowy Owls.  Take a close look at the red locators.  Probably the most unusual sighting was a Snowy Owl at the Honolulu Airport. 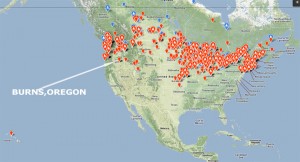 If you play around with the map, you can even bring up historical data.  Here’s a map showing Snowy Owl sightings from historical data, with the recent sightings in red, and the older sightings in blue. This eBird.org map is a part of Cornell’s Lab of Ornithology and National Audubon Society’s venture into citizen science. 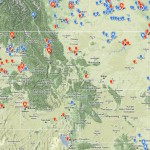 EBird had record participation in January 2010 with participants reporting more than 1.5 million bird observations across North America. EBird promises to build a better understanding of bird distribution across the western hemisphere and beyond.

Marshall Iliff, one of three Project Leaders for eBird, believes the underlying causes for Snowy Owl incursions such as this one are fairly well understood.  When populations of rodents, such as lemmings, are especially high Snowy Owls experience high breeding success.  If those rodent populations crash thereafter, overcrowded owls surge southward in search of food, with younger birds typically moving farther.  “The numbers being seen in the Lower 48 now are exceptional, but such incursions do happen at least once a decade,” said Iliff. 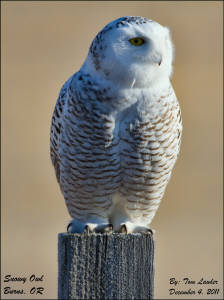 Birders usually want to know: Is it Male or Female? The Burns Snowy has been called both.  Denver Holt, an owl researcher http://www.owlinstitute.org/ who has spent the last 20 years studying the Snowy Owl up in Barrow, is cautious about identifying the sex.  “The more experience you get the more questions you have,” Holt says.  Yet the Journal of Raptor Research Dec 2011, Vol. 45, No. 4: 290-303 has just published an article “Sexing Young Snowy Owls” by lead author Mathew T. Seidensticker,  co-authored by Jennifer Detienne, Sandra Talbot, and Kathy Gray, and Holt available at this link http://www.raptorresearchfoundation.org/publications/journal-of-raptor-research/current-issue. 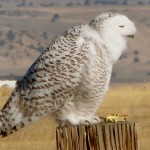 Seidensticker and fellow researchers based their paper on a study of 140 owls from 34 nests.  Specifically they looked at a secondary flight feather #4 on the left wing.  Then they compared their predictions with blood tests.  The model that correlated their data said they were 98% correct, actually they were 100% right.  In short what the secondary feather #4 told them was: the female owl had a marking that they called a bar because it touched the feather shaft, while the male had a marking they called a spot or blotch that did not touch the feather shaft. 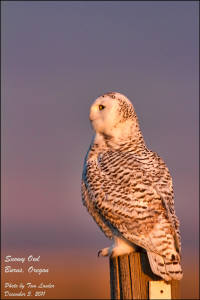 Denver Holt has been inundated with photos from this Snowy Owl migration and with the question- Why are there so many Snowy Owls so far south?  Again Holt hesitates to be too definitive, his paper published in Northwestern Naturalist 89:145-151 titled “The 2005 to 2006 Snowy Owl Irruption Migration to Western Montana,” http://www.bioone.org , discusses the very common speculations around these questions: Why the large-scale migration from their northern breeding grounds? Are Snowy Owls Communal?  Are there differences in Age and Sex Ratios on Winter Grounds? , and Do they all Die in large-scale winter migrations?.  For each question Holt lists evidence making a simple answer impossible.

Male or Female, solitary or communal, the Burns Snowy Owl was definitely hungry.  “I saw it gobble 3 rodents between 4 and 4:45,” said Tom Crabtree, ECAS member. 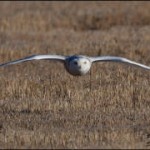 “It was wonderful watching the owl fly across the field and catch and gobble up its meal! (The Snowy Owl) was simply spectacular!” Diane Kook, ECAS member remarked. 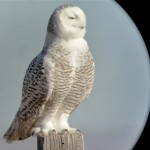 Initially birders visiting the Burns Snowy Owl described  how close they were—about 30 feet.  A more recent posting said that the Owl has taken up a more distant location to execute its hunting. “At one point the Owl flew up to a fence post near the road and seemed a little disturbed by the traffic. Eventually the Snowy Owl flew across the highway and into the fields on the southwest side of the road around sunset,” noted Damian Fagan, ECAS member. This makes sense when you think about how sound plays a key role in their hunt. Their round face somewhat like a satellite dish funnels sound to the ears.   And being able to rotate their heads 270 degrees gives them the ability to see all around themselves.

“Keep your eye on the eBird map,” said Iliff.  “There’s bound to be more sightings before the Snowy Owls follow their strong instinct to return to the Arctic.”  By March or April, those that have survived the stress of the extra-long migration and have found enough food, will be gone—back to their Arctic nesting grounds.hunting