The 2008-2009 excavations at Matcharak Lake confirm many assumptions about the Denbigh people 4000 years ago. We have shown the Denbigh to be specialized caribou hunters at least when they are in the mountains. We have shown the extensive use of organics as tools and that these earliest of Paleo-Eskimos were skilled artisans. Although research is ongoing and incomplete it is safe to say that any future Denbigh sites that are discovered will be compared with Matcharak Lake. 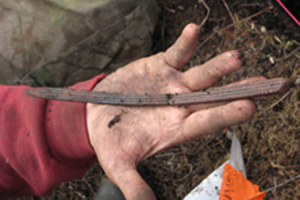 The next stage of the analysis will be to develop an understanding of how the artifacts recovered here are related to the animal remains. What tools were made for what activities and how does this differ from other Denbigh sites in Alaska. This information will be highly valuable for making interpretations at sites where bone was not preserved and only stone tools are found.

Photo: The first ever discovered artwork of the Denbigh Flint Complex, a group considered by archaeologists to be the first Paleo-Eskimos in Alaska. The incised bone artwork was produced with a burin or burin spall engraving tool.

Additionally, I have begun work to study caribou teeth to get a better understanding of the age structure of the animals that were killed. When Artiodactyl teeth grow they lay down a daily layer of cementum which grow thicker or thinner depending on the season. By sectioning the caribou teeth researchers are able to determine the age and month of death for that individual. By studying the cementum I will be able to get better seasonality data and to test my hypothesis that this site was occupied once for a long time, rather than multiple short term occupations.

Furthermore I will be able to determine the if juveniles, males or females were the targeted prey which could tell us a great deal about hunting strategies of the Denbigh people. Along with the ongoing analyses of the lithics, the teeth and the planned testing of the new sites at Matcharak Lake comparisons with other Denbigh sites in various places throughout the Brooks range and the coast will be done as well. With this information we will start to build a more comprehensive model about Denbigh life-ways.