A midden is basically a prehistoric trash dump. After processing animals for consumption, the unusable remains were often discarded in an area of the camp where people were not working and sleeping. 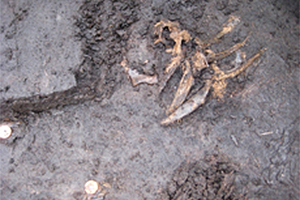 Normally in the harsh arctic environment, bones on the surface waste away rather quickly. At Matcharak Lake, however, conditions were just right to preserve the discarded remains of numerous meals. This preservation was due to the fact that here at Matcharak Lake we have the ongoing formation of peat, and a rather shallow level of permafrost.

Photo: Unrivaled preservation of bone, including this articulated caribou thorax, designates this discovery as one of the most important Denbigh Flint Complex sites found to date.

About 4000 years ago the environment and climate was relatively dry and warm, but by 2500-3000 years ago a small cooling event occurred which led to the advance of glaciers in this region. This likely led to increased sediments accumulating along terraces and benches. This, in turn, led to a fairly rapid incorporation of the discarded animals into the permafrost, where they remained pristinely preserved until our excavation in 2008-2009.

Further work around Matcharak Lake in the 2010 filed season uncovered evidence for at least 10 other sites dating to around 4000 years ago with equally well-preserved faunal remains.

(The preservation of archaeological bone)