By investigating material culture, technological remains from our human past, we can better understand the way people interacted with the environment thousands of years ago. It can give us answers to how people adapted to change, whether it is climactic, technological, or interactions with other cultures. We as a global society are still facing these changes today and will continue to as long as we are in existence. We can not ignore our past if we want to be successful in the future. 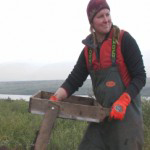 I think people are by nature genuinely interested in the past, the deep past, the one without written words. This curiosity among modern day humans stretches beyond ethnic groups, age groups, and the borders of countries. It would be a shame to ignore these questions that we have about our past and not study the lives of people that have come before us. This research enriches the heritage of the Alaska Natives that are still living in the Brooks Range region and all of us who care about our shared human trajectories.

This research isn’t necessarily different or better than what other archaeologists are doing around the state. It’s really hard to compare one archaeological site to another and the technique used to excavate at a site to that of another. Each researcher has their own way of going about excavating given certain set scientific parameters. We employed high tech systems to record where every artifact and faunal remain was found by using precise total station equipment. We were fortunate to have these tools in the field, but we also backed up this electronic technology to record the three-point provenience locations on a paper map with our pencils. 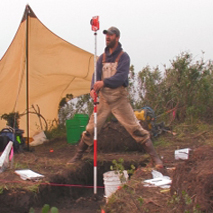 The site at Matcharak Lake is quite unique in that the faunal remains are highly preserved. During post excavation analysis, these animal bones can tell us a lot about the activities that were going on at this site thousands of years ago. The bones not only indicate what species of animals were being hunted but also what time of year the site was occupied, the intensity of the procurement strategies, and an approximation of how large the human population was at the site. We can then tie this knowledge into a broader picture of this region using sites dating back to the same prehistoric time period. The research questions that this site has the potential to answer ranges from detailed site-specific investigations to a larger regional context such as the peopling of the Arctic.