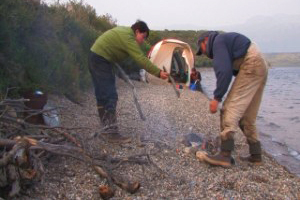 When we were working at the Matcharak Lake Denbigh Site in 2009, we noticed on a map that there are other spots around the lake which look like promising spots where people might have lived. So one day instead of excavating, Victoria and I took our boat across the lake and went on a short survey. We tested several areas on our hike, simply digging small shovel pits to see if any artifacts were present. Eventually we came to a kind of peninsula and on the south-facing eroded slope of that peninsula we saw flakes! We decided to dig a little test above the flakes, in the area where vegetation was still holding the soil. In the test we found more tiny flakes and a large well-preserved bone. This was great news, because we could get a radiocarbon date on bone and because this meant there might be another frozen midden on the shore of Matcharak Lake.

That winter we dated the bone and it turned out to be slightly older, by about 1000 years, than most bones and charcoal at the Denbigh site across the lake!

In 2010 another team of archaeologists went back to the lake. I could not join them, to my disappointment, because I was busy studying for my comprehensive graduate school exam. But Andy and his crew found and tested half a dozen more sites in the southeast corner of the lake. Practically every site had well-preserved bone and flakes!

Matcharak Lake is a fantastic place where I think we will be working for several years to come. I always wait with impatience for summers, when I can go back to the beautiful landscapes of the Brooks Range. Even though the weather can sometimes torture you with heavy rains and thunderstorms, even though snow might fall any day of the summer, even though mosquitoes make sitting still and excavating almost unbearable – all of this is outweighed by the clear air, the beautiful mountains surrounding you, the wildlife sightings, the scenic rivers, and, last but not least, spending weeks living in the outdoors with your great friends and discovering secrets of the past!

One of the most memorable moments at Matcharak Lake for me was the night we all sat around the fire watching a majestic sunset and singing songs, accompanied by Andy’s guitar and Cody’s mandolin. Perhaps 4000 years ago, hunters tired from a day of pursuing caribou and the rest of the community who helped butcher the prey sat together on the shore just like us, enjoying the views and playing their musical instruments…