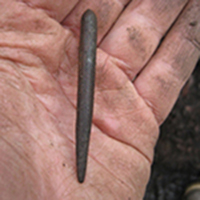 The results of my studies identified four species of fish, dominated by arctic grayling, burbot, lake trout and northern pike, two species of bird, mostly willow ptarmigan, but a few duck bones (species unidentified) were recovered as well. This is important because ducks are migratory species only found in the Brooks Range in warmer months of the year. Nine mammalian species were recovered here including vole, ermine, Arctic ground squirrel, Alaska marmot, snowshoe hare, porcupine, possible wolf or dog, Dall’s sheep and of course, caribou.

Photo: This is a bone point with a tiny, engraved incision which runs the length of the piece. The function of this bone tool is undetermined but it may have been an arrow point, or a leister prong barb for fishing.

The wolf bones are of interest and have been selected for genetic analysis at the University of California Davis. Here researchers are attempting to extract DNA to determine if the bones are from a wolf or a domesticated dog. If the bones prove to be domesticated dog this will be the only known evidence for dogs associated with the Denbigh people.

Some archaeologists work under a theoretical paradigm known as Evolutionary Ecology. This paradigm holds that animals will always try to maximize their fitness by spending the least amount of energy to acquire the maximum amount of calories. We can use related theories to help determine what the Denbigh ate, and when. Optimal Foraging Theory models are used to calculate available calories per species of animals and how much energy would be acquired if that animal was killed for consumption. For every animal killed there are costs and benefits that must be evaluated. The more animals there are in the area the easier they will be to find and kill and in general the larger the animal the higher ranked this prey will be.

However, it takes more energy for example to climb a mountain to shoot a Dall’s sheep than it does to kill a squirrel next to your camp, the trade-off being fewer calories expended but also fewer gained. Thus we have to consider search time, handling time for processing and transport time to get the meat back to camp. Once these values are built into the model we can evaluate what animals are the highest ranked and which should be included in the diet. My model suggests caribou is the highest ranked for that time of year that it is present. When caribou are absent however we should see a widening of diet breadth to include all species that are found on the landscape. 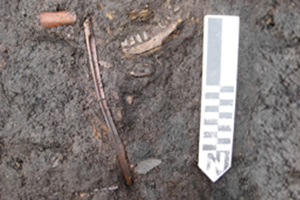 This is rather intuitive and the empirical evidence suggests the Denbigh people did behave in a similar fashion. While more work needs to be done to better understand the seasonality information, the evidence we have suggests this midden is the result of a group of 20-40 individuals who arrived in the summer time, exploited fish, birds and small mammals and then focused their energy toward caribou in the fall. The group likely stock-piled the meat (it is shown that at least 25 caribou were killed here) and subsisted off the stored reserves through the winter.

Photo: This image shows the placement of the designed bone tool associated with a caribou mandible and other bone fragments. Also present in the soil are tiny flecks of charcoal which are used for radiocarbon dating artifacts and bone.

Processing information shows that the caribou bones found toward the top of the midden were more highly processed for bone grease and marrow, two important dietary supplements to arctic peoples. This would be expected behavior for people who are lacking fat resources. We then find that by spring the hunters here at Matcharak Lake targeted the caribou again as the animals migrated north to their birthing grounds. After this final hunt the group migrated on.