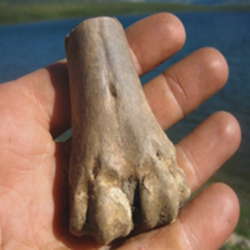 Does watching the archaeologists featured in Paleo-Eskimo videos hard at work– peeling away earth, getting excited over discovering an artifact– summon feelings of jealousy for anyone else? It does for me.

The three archaeologists are working to uncover truths 4,000 years old. Situated in Gates of the Arctic National Park, their dig site reveals an ancient peoples’ hunting weapons and prey, all set on the shores of the deceptively harsh and breathtakingly beautiful Matcharak Lake. This is Alaska. 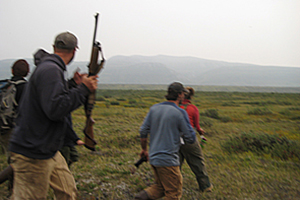 There is something fascinating about seeing their modern-day expedition’s campsite in contrast with the Denbigh people’s site. While the excavation team has an all-weather tent, sleeping bags, an inflatable boat and fishing rods, even a guitar leaning against the tent wall, the team points out that the Denbigh had to face their hunt site without modern day comforts. What must it have been like?! When a grizzly wandered close to their camp, they had no rifle to fall back on, only the small flint tools that the masterful craftspeople created for themselves. 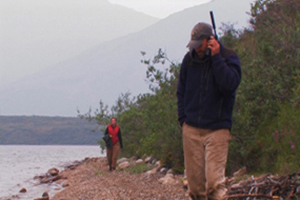 The Denbigh people left rich archaeological evidence at the Matcharak Lake site. Discarded stone tools and bones from caribou, dahl sheep, wolves, fish and small mammals are all hidden there, ready to be carefully uncovered by the excited team armed with excavation tools, lots of ziplock bags and sharpies, and a willingness– an eagerness!– to get their hands dirty. The site, covered over four thousand years ago and well preserved by permafrost, offers information not found anywhere else.

We don’t possess time machines. As the scientists point out, sites like this are the only way to learn about cultures like the Denbigh which came before us. Our human roots.

It’s a painstaking process. As archaeologist Andrew Tremayne points out: the team has opened 15 square meters, while he estimates that 800 square meters could be excavated for artifacts at this site alone. Time is an issue as erosion into the lake destroys layers of evidence. Here’s my question… If it’s permafrost that kept this site so well preserved, how have recent global climate shifts threatened the preservation of similar sites throughout the arctic circle? Archaeologists do amazing work uncovering and preserving truth, but what more are we losing due to the effects of present-day humans on the Alaskan wilderness?